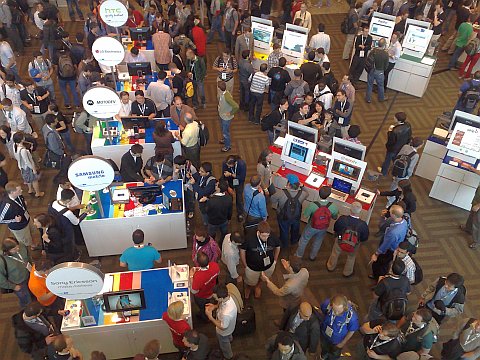 The theme of today’s I/O keynote was Google’s commitment to HTML5 and web apps. The day’s significant announcements all lend support to Google’s web centric vision of the future:

Several new web apps were demoed:  Clicker, a search engine and directory for web video,  photo editor MugTug and an online version of Sports Illustrated magazine that mirrors the look and feel of the print version but also includes interactive features in both content and ads.

On the surface very little of today’s announcements seems to apply to mobile. But I feel it was a big day for mobile, especially mobile web. Sure, the Chrome WebStore, WebM and the web apps were presented in the context of the desktop web. But make no mistake, Google considers HTML5 and web apps the future of mobile too. At a press conference after the keynote, Sergy Brin said he felt that the more limited hardware of mobile devices favored native apps for now, but that in a year or two desktop and mobile HTML5 capabilities will converge. What is happening now in the desktop browser is coming soon the mobile browser.

Based on several hints that Vic Gundrota  dropped today,  the big announcements are tomorrow and will be Android and mobile related. That will almost certainly be Android 2.2 (Froyo) and Google’s much rumored  TV initiative. I’m sure there will be some surprises as well. The Chrome Webstore seems a natural for the browser centric Chrome OS.  A Chrome tablet would be a nice followup.