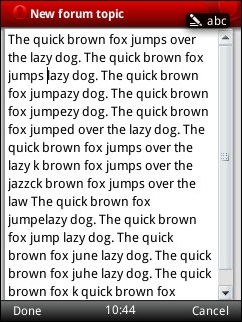 Ah, the joys of beta software.  It turns out that the  Beta 2 “Update”  release of Opera Mobile 10 that I raved about last week has a bug that inserts random text in mult-line edit fields. It’s bad enough to make using Web-mail and most online Twitter clients almost impossible.

The problem occurs as soon as you type text that extends beyond the width of the screen. When Opera wraps the text to the next line it also copies part of what was typed into the new line. With every new line Opera copies more and more text, quickly makeing unreadable gobbledygook of what you are typing.  The screen shot shows the results of typing “The quick brown fox jumps over the lazy dog”  three times.

To make matters worse, the ability to disable in-line editing and use the phone’s native editor in a separate  window, which would be a usable workaround, was removed from the Update release.

Opera has acknowledged the issue and I’m sure it will be fixed in the next release.  I’m not expecting that the fix will available until after the holidays. I certainly don’t want to see the Opera Mobile development and QA staff slaving away while the rest of us are celebrating with our families.

In the meantime there are a few rather ugly workarounds.

I plan to continue use the Update release because I want to contribute to its development by bug reporting any other issues that I find. Plus I don’t do a lot of posting to forums, web-mail or commenting on blogs using my N95, preferring to use the virtual QWERTY of my Android phone.  However, if you do a lot of long form data entry on your S60 phone I recommend that you stay with or roll back to the pre-Update version of Beta 2. Incidentally, the Windows Mobile Opera 10 Beta 2 Update does not suffer from this bug so WinMo users should not hesitate to update.