3 WapReview - Sports Sites
Whatever your favorite sport, chances are that you will be able to find the latest scores and results in this directory. Some of the sports covered are football, baseball, basketball, soccer, cycling, motorsports, snowboarding, surfing, skateboarding and cricket. 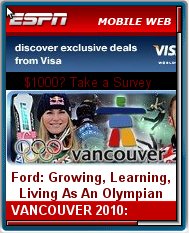 ESPN is the most popular general sports news site in the US on web and on mobile.  It has extensive coverage of college and profession team sports, tennis, horse racing, motor sports, golf and more.

ESPN is one of the four TV networks that share the rights to broadcast NFL games. Their web site lets fans follow, in real time, any one of the 14 NFL games typically played on Sunday or the single Monday night game. The mobile site delivers almost all the same information. in a very effective and elegant way. BTW, I'm focusing on the ESPN's NFL coverage but ESPN's Web and mobile sites also cover all the major and many of the minor sports. There is live coverage of baseball and basketball but the NFL coverage is the most detailed.

When you visit the ESPN site, the first thing you see is a list of sports. After you choose NFL and then scores from the front page, you see a list of this weeks games with the scores. Scores of games that are finished are marked with an "F" and clicking on them will lead to a typical after game description of how the game unfolded. But selecting a game in progress brings up a screen showing the score, how much time is left, the down, the position of the ball, which team has procession and the outcome of the last play. These are the essential elements that a football fan needs to follow the game. Below the critical time-sensitive information is a refresh link. The page doesn't refresh itself presumably out of consideration for those of us on metered data plans. Scrolling "below the fold" will reveal secondary information such as game statistics and links to the pre-game story and a page detailing the scoring plays of the current game.


Excellent US-centric sports site. In depth coverage of all major and many minor sports.


Founded a year and a half ago by several ex-AOL and Yahoo executives with seven figures of venture funding, SB Nation (for Sports Blog Nation), is a collection of over 250 individual blogs. The SB blogs offer sports news, scores and fan opinion for  specific teams, leagues or sports. There are SB blogs for most of the NBA, NFL, NHL and MLB teams, many colleges plus soccer, golf, tennis, motorsports, cycling, horse racing, boxing and just about every other sport you can think of. 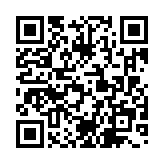 Follow the games online on your phone or look up statistics and trivia to settle a bet.

3 items
"America's national pastime" is popular in North and South America and is big in Japan. Here's a collection of mobile sites covering the game including MLB.com's great site with live paly by play coverage of every AL and NL game.

14 items
Soccer or Fooball as it's called in most of the world is one of the most popular of team sports. Truly universal, soccer is played in almost every country and is considered the most popular sport in the world.

This folder contains many mobile web sites covering soccer around the world with live scores, results, news and statistics.

7 items
Cricket is the oldest team sport, dating back to 1550. The game is played in over 100 countries and is etremely popular in the UK and India. Here are some mobile sites covering Cricket around the world with scores, news, statistics, standings, player profiles and photos.

2 items
Surfs up! Or is it? Find out with these mobile websites offering current conditions at the world's surf breaks along with surfing news, photos and event calenders.

5 items
Wild about Alpine and Cross Country Skiing or Snowboarding? This group of mobile sites will help you keep track of conditions on your favorite slopes and watch some great snowboarding videos.

9 items
The ancient game of golf which dates back to 1846 is popular as both a participant and spectator sport. 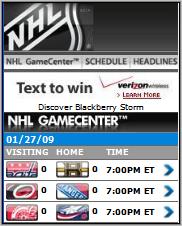 The National Hockey League (NHL) which is professional hockey in the US and Canada has launched a slick new mobile site at m.nhl.com.  It includes a mobile version of NHL Game Center which displays today's games with live scores in a grid.  Clicking on a game row opens a view with a summary of scoring plays  from that game.  Game Center has a history feature that lets you to skip back a day at a time  to  see a recap of  the scoring of  completed games.  There doesn't appear to be a way to jump directly to a specific day, however.

The site also has  news, scores, standings, statistics and photos.  There is are also  "Videos"  and "MyNHL links which go to a "Coming Soon" page.   I wish designers wouldn't waste clicks and bandwidth on comeons like that.  NHL Mobile adapts nicely to various devices, delivering a simple, mostly text version to basic phones, a more richly formatted one with plenty of  images, as shown in the screenshot) to phones with full web browsers like the Nokia N95 and a very nice iPhone specific  design.  Curiously, Opera Mini gets the dumbphone version. The site design is by Quatro Wireless.


The Hockey News, largest selling print hockey publication in North American, offers this mobile site with scores, stories from the magazine, and columns and blogs by THN's reporters.

In spite of the short season (Sept to January), NFL Football is the US' most popular professional sport in both live attendance and number of TV viewers. It is also the most profitable.

This folder contains links to a variety of mobile sites dedicated to the league as a whole or to specific NFL teams. These sites are your source for NFL statistics, prognostications, game recaps and live coverage of every NFL game, instantly available on your phone wherever you are.

Rugby is a far older game than soccer or American football tracing it's roots back to Roman times.  The sport is played around the world and is especially popular in the UK, Ireland, Australia, New Zealand and South Africa.

NBC Sports (mobile.nbcsports.com) "Sports" is kind of a misnomer for this site. As of this writing in October, 2006 NBC Sports Mobile is covering only one sport - NFL Football. Last week's baseball World Series was never mentioned on NBC Sports Mobile! Not that it's a bad football site - for pigskin fans the site is very good with lots of game photos, scores, player stats, week by week schedules, game recaps, injury lists and news and features about notable players. The one thing that is lacking is live play-by-play or even scores for games in progress, but for that there is always ESPN Mobile (review). I wonder what they'll do when football season ends, switch to covering the NBA perhaps. 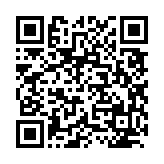 A rather weak sports site. Only covers major US sports - NFL, MLB, NBA, PGA, College football and hoops and professional tennis. Each section has scores and just 3 stories. No photos.

Update 7-Jul-2007: The site has been completely redesigned and now has images, coverage of more sports and more and longer stories. 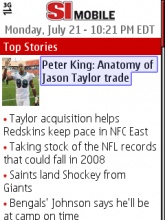 cbsSportsline.com: has a new mobile url (cbs.volantis.net/sportsline/) and a new and very attractive site design. The old site was text only, the new one has images resized to browser widths and flashy image gradients. Content's not bad either. 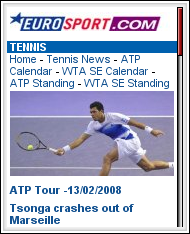 Eurosport (m.eurosport.com) Eurosport Mobile has a new url and a redesigned and much improved site. The front page has been expanded from 5 headlines with daily updates to 10 headlines updated every few minutes and finally there is LIVE coverage, lots of it. At this moment there are live reports from 7 football (soccer to us Yanks) matches, 4 snooker! matches, 2 tennis matches and 2 basketball games. Besides those sports, Eurosport also has extensive coverage of Motor Sports, Cycling, Cricket, Track and Field and Rugby. 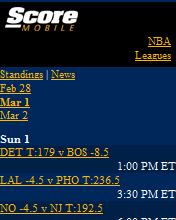 The Score is a  Canadian cable TV sports chanel.  The Score's mobile site covers all major North American professional sports with news, information, highlights, schedules, betting line and live scores. As befits the name, The Score Mobile's front pages consists of the latest live scores for a single sport, currently NBA basketball.  You can customize The Score Mobile to show a different sport or league on the front page and adjust the auto refresh frequency and set your time zone. Source: Oh! Mobile Directory


Official site of the The Southeastern Conference (SEC) which features some of the strongest schools in US college sports including football powerhouse Alabama and perennial NCAA women's basketball champions Tennessee. The conference's mobile site has live scores, news, standings and schedules. Source: Mobile Mammoth

The official mobile site of the Ultimate Fighting Championships, a U.S. based martial arts genre that allows fighters to combine skills and moves from boxing, wrestling, judo, karate in a championship series designed to pick the best fighter from any discipline of martial arts. The site has news, free streaming videos and an event calendar.  Mobile site design is by Quattro Wireless.  Source Tappity


Displaced Phan is a mobile site for fans of all the Philadelphia sports teams, the Eagles, Phillies and 76'ers.  The site has a forum-like open blog where all registered users can post. There is also a photo gallery and links to sports news from ESPN.

The NCAA College Basketball Championships on your mobile. Popularly known as March Madness, the two tournaments (one for men's teams the other for the women) each feature the top 68 mens and 65 womens US college teams in a 3 week long single elimination tournament.

March Madness is easily the most popular college sports event in the country. I think its appeal is due to the large number of teams, increasing the likelihood of your alma mater participating, and for gamblers the lure of so many chances to win or loose in a short period of time. It also helps that each successive round cuts the pool in half with the later rounds having the memorable alliterative names like "Sweet 16", "Elite 8" and "Final 4".

Follow all the action on your phone with these March Madness mobile Webapps.

The 2012 London Olympics start July, 27th. There's no shortage of ways to follow the Olympics on your mobile phone. Here are my favorite sites offering schedules, predictions, results and news from the games.

It's a QR (Quick Response) Code containing the URL of WapReview Mobile. Snap it with your phone's QR Code reader to go to the WapReview mobile site.

's indicating the quality of the site's writing, depth, timeliness and accuracy.

's indicating the usability of the site on a mobile device, based on ease and intuitivness of navigation and lack of excessive scrolling through ads etc. to reach main content.