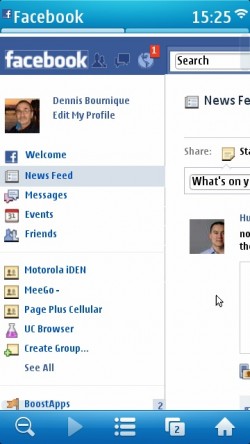 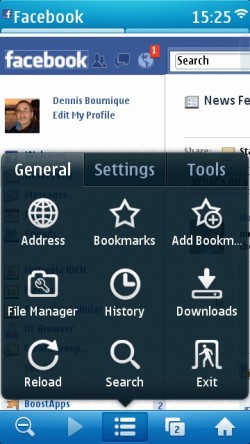 The English language version of the UC Browser 7.8 for Symbian S60  V.1-5, Android 1.5+, Java ME & Windows Mobile touchscreen PPC 2005 and later was released last week. it can be downloaded from ucweb.com using a PC or  wap.ucweb.com with your mobile browser. The Symbian V.5 download also works on Symbian^3 phones like the Nokia E6.

New in this release are: 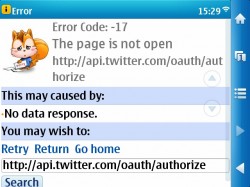 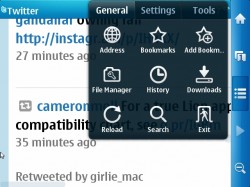 I tried UC 7.8 on three Nokia Symbian phones; a N95-3, N8 and E6, an HTC Magic Android phone and a basic Java phone, the Motorola WX400.  It seemed to work well on all the devices. Not so with a Motorola i1 Android OS 1.5 phone where the browser installed but hung on the startup screen. I wonder if the browser really is Android 1.5 compatible as UC claims. Previous versions of UC worked well on this phone .

On the E6, the UC Browser worked well with the small screen. It lets you use the Dpad to jump from link to link in mobile view. In zoom mode there’s virtual mouse pointer that you can move around the screen with the Dpad to highlight and hit small buttons, links and UI elements that tend to be hard to tap accurately on such a small screen.

The new Android UI is essentially the one used in the touch screen Symbian version since UC 7.7.  A bottom (right side on the E6) toolbar, which can be hidden if desired, gives one click access to the back and forward buttons, home screen and window menu.  A menu icon on the toolbar brings up a tabbed menu offering access to settings and advanced features like clipboard management and the download manager. I like the UC touch menu design and find it requires fewer clicks for most actions than Opera Mini 6.1’s touch UI.

Site compatibly was generally good with one significant exception, Twitter. I had no problems opening most sites. But the mobile and desktop versions of Twitter.com and third party Twitter webapps like Dabr would frequently either hang after I entered my user ID and password or throw a “403 rate limit exceeded error”.  While this could have been a Twitter issue rather than a UC one, Twitter would work normally in Opera Mini and the Android browser during the time it was failing in the Android browser.

Although I generally prefer Opera Mini, the Opera Mini servers have been misbehaving a lot lately with web forms frequently not posting and links going to totally different sites than they should. Due to these problems I’ve been using UC more and more lately and am finding it generally more reliable, other than the issues with Twitter. 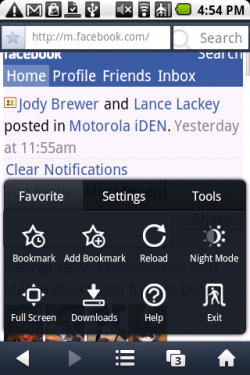 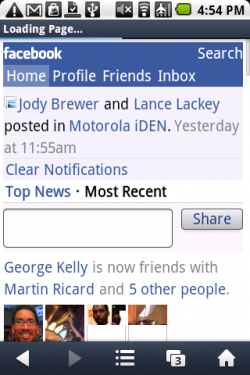