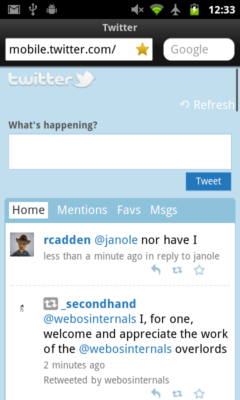 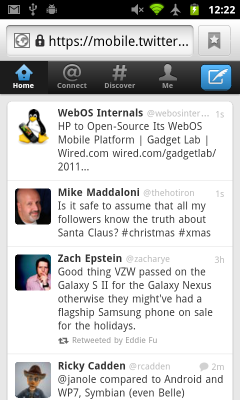 Yesterday Twitter announced that it was in the process of rolling out a new design that would unify Twitter’s look and feel across all platforms.  The new full Web version will be rolled out slowly but according the Twitter the new look is available now in the Android and iOS apps and at mobile.twitter.com. At least that’s what they say.

I headed over to mobile.twitter.com to look at the new design. And to my surprise I saw the “old” Twitter mobile site (image above, left). I was using Opera Mini, so thinking maybe it was not supported, I switched to Opera Mobile 11.5 – no change. The Symbian Anna browser was “unable to connect” to mobile.twitter.com at all! I finally had better luck with Android. The Froyo and Gingerbread browsers are getting the new layout. So apparently only iOS and Android. At least I’m still seeing the old version in the bada and WebOS browsers. I don’t have a WP7 or BlackBerry OS 6 device to test with.

I’m not really complaining about the lack of cross platform support in the new Webapp. The old one is still available for the unsupported platforms (except Symbian^3 where Twitter is currently broken) and it works pretty well, even with feature phone browsers. 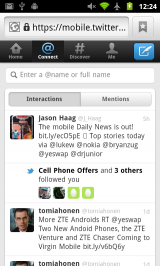 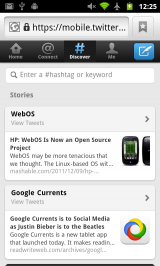 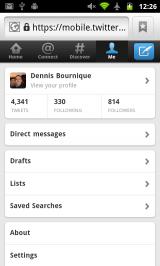 The new webapp does look gorgeous, I’ve got to give credit to Twitter’s designers for that. Will I be using it? Probably not that much. I’m a big fan of the “old” editabe re-tweet, which Twitter for some reason refuses to support. Plus, when it comes to Twitter mobile Web apps, nothing I’ve seen comes up to the high standard set by Dabr. Update: 16-Jab-2012 It looks like this new Twitter webapp supports something called a “quote tweet”, which is essentially an editable re-tweet except that instead of using the “RT” convention, it wraps the original tweet in quotation marks.

There are some some pretty big paradigim shifts in the new design.  The old “Mentions“, “Favs” and “Messages” tabs are gone, replaced by “Connect“, “Discover” and “Me“.

I think the new organization generally makes sense, although it will some getting used to. However there are  two areas where I think the new Twitter is harder to use than the old, DMs and hashtags. 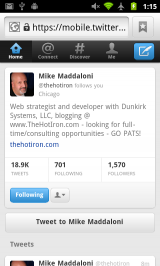 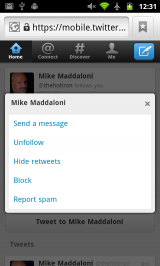 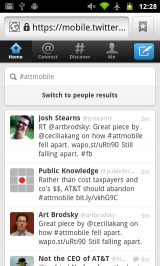 In summary, the new mobile Twitter Web app looks good. It seemed quick and smooth on my Nexus S 4G.  But with lack of editable re-tweets and serious usability issues around hashtags and DMs I think I’ll stick with Dabr.