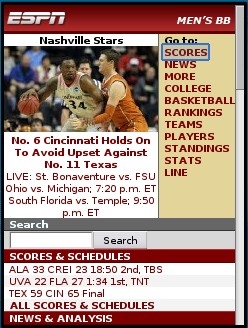 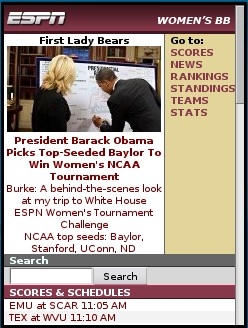 March Madness has begun. In the US that means the three week long  NCAA College Basketball Championships, an elimination tournament to determine the top US men’s and women’s college basketball teams. It’s an exciting series leading up to the final “Sweet 16”, “Elite 8”,  “Final 4” rounds and the nation championship game.

This year the men’s tournament began March 13th  and ends with the national championship on April 2nd. The women’s tourney runs from March 17th to April 1st.

March Madness is easily the most popular college sports event in the country.  Many of the 130 games  in the men’s and women’s tournaments are played during working hours.  Millions of workers follow the games on their PCs.  Millions more keep up with the tournament using their phones. Here’s a list of the major mobile web sites for March Madness coverage. Most work with all mobile browsers.

m.espn.go.com/ncb/ The number one mobile sports online destination has a particularly attractive and usable March Madness site.  It has just about everything you could possibly want in the way of  coverage including live play by play, news, scores, schedules, analysis, photos, team and player profiles and the “Daily Line” betting point spreads for upcoming games. 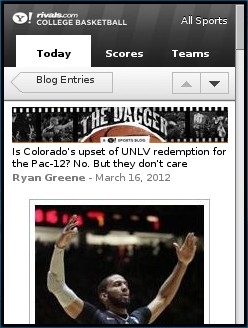 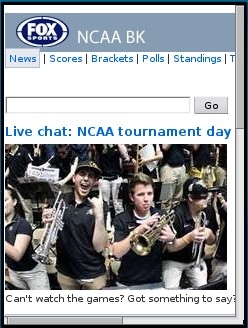 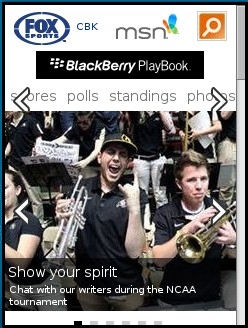 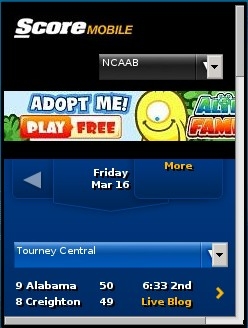 extreme.mobile.msn.com/sports/cbk/ The “touch” web version of the MSN/Fox Tourney site works on most smartphones. Compared with the regular version it has more and larger photos, higher quality videos and a live score ticker.

m.thescore.com/ncaab/ As befits its name, the Score’s March Madness front page shows  auto-refreshing live scores for games in progress and results for completed games.  Click a game to see more details including box scores and the betting line and to add your comments to the live blog. 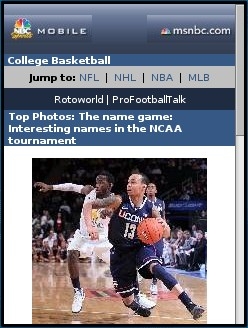 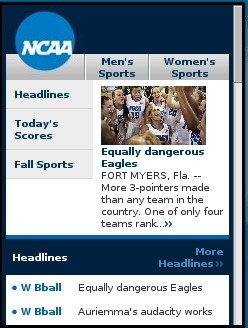 m.nbcsports.com/s/2004/Home? NBC’s mobile college basketball page has extensive coverage of both the men’s and women’s tournaments with scores, feature articles, game recaps, videos and some of the best sports photography on the mobile web.

m.ncaa.com The official NCAA mobile site has lots of March Madness coverage including reports and photos from the top games and scores for completed games. 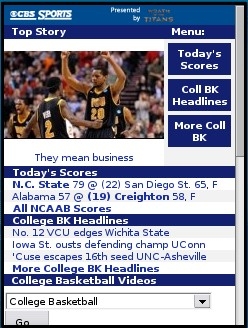 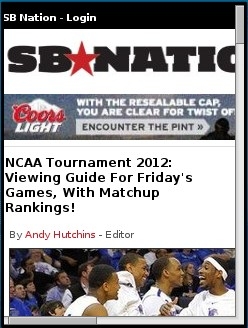 wap.sportsline.com/s/showPage.do?pageId=8449761 CBS Sports’ College Basketball page is pretty much devoted to March Madness while the tournament is on . Besides scores and tournament news this site features videos, schedules by bracket, standings, team profiles and statistics.