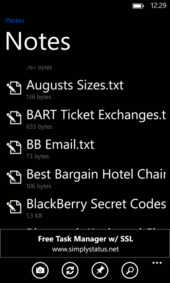 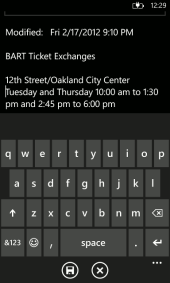 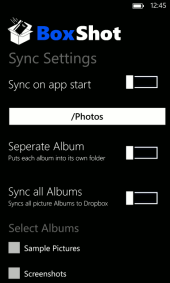 I don’t use cloud file storage services much, but I do use Dropbox for online note taking on all the platforms (Linux, Android, Symbian) I use. The notes are just plain text files containing things I want to remember and have available everywhere like; family member’s clothing sizes for gift shopping, GSM hash codes, frequent flier numbers, train schedules, tech tips, etc. I create and update the notes with a text editor; gedit on Linux, redak on Symbian and Text Edit or the built in editor in the Dropbox app on Android.

I’ve been taking notes on my mobile devices since my Palm Pilot days. Initially I used Palm Memos, then Zaurus Memos, then Symbian Notes. I currently have hundreds of these notes, some over 10 years old.

Migrating notes from one proprietary platform to the next was always painful and time consuming. So I recently converted all my notes into plain text files and organized them by category in Dropbox folders, which I believe that’s a future proof solution. If Dropbox goes away I can copy my local folders of text files to a different cloud storage system or even my FTP server.

I prefer Dropbox over other cloud services because it has robust clients for the three platforms that I use. On Android and Linux I use Dropbox’s own clients and on my Nokia N8 I use Cutebox, a very good 3rd party client for Symbian Belle (I still carry my Nokia N8 quite a bit, especially when I plan to do some photography). The apps on all three platforms let me store local copies of my notes, so I’m not dependent on having connectivity to be able look something up.

I like to be able to use Dropbox on Windows Phone like I do other platforms, by keeping a copy of my Dropbox notes in a file system folder where I could open them with any text editor or other compatible app. But Windows Phone doesn’t have a user accessible file system so that’s not possible. However each Windows Phone app does get read/write access to it’s own sandboxed area of the filesystem so a Windows Phone Dropbox app should at least be able to able to:

The Windows Phone Dropbox app that comes closest to meeting my needs is BoxShot ($1.29, also available as a free ad supported app with slightly reduced functionality). It lets me view and edit the text files in my Dropbox using a built in editor (image above, center) and create new text notes and upload them to Dropbox. The only thing missing is that it doesn’t let me to save a local copy of a note.

BoxShot has a lot of other features besides the ability view and edit Drop text files. The free version can search for files in your Dropbox, upload photos to Dropbox from the Gallery or camera, rename or delete Dropbox files and folders and move or copy files between Dropbox folders. The paid version does all that plus it removes the ads, adds the ability to automatically sync one or more photo folders to Dropbox and has a Live Tile (image below, center) that displays your Dropbox quota and free space.

Besides lacking the ability to save a Dropbox file locally there are a couple of other BoxShot features that could work better. The search shows you files whose names match the search string, but taping the filename just opens the folder the file is in rather than the file itself. Photo folder syncing is great, and unlike uploading with the Gallery’s built-in Skydrive uploading, photos are uploaded in their original size. But I wish there were an option to restrict automatic uploading to Wi-Fi only so I don’t burn through my limited mobile data allocation uploading high resolution images.

Interesting, there’s a free Google Drive Windows Phone app called GDocs that does everything I need including saving a local copy of every file you view or edit (image below, right). I’d move all my notes over to Google Drive except that I haven’t found any good Symbian or Linux clients for Google Drive. 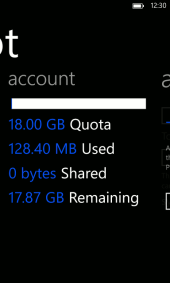 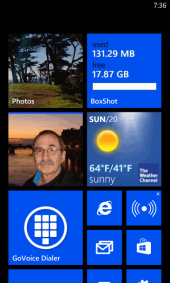 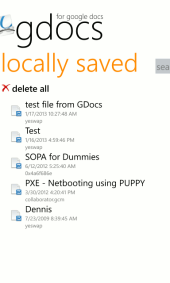