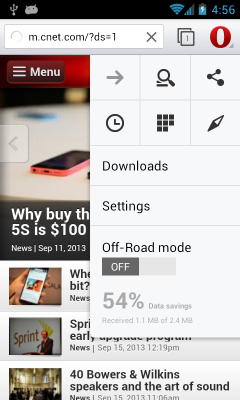 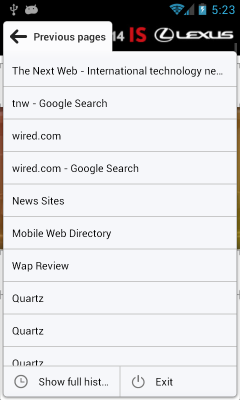 Opera Software has released an updated Beta of their Chrome/Webkit based Opera Browser for Android. According to Opera the changes in this version include:

The biggest change is the one to off-road mode. In previous Opera Browser for Android versions Off-road mode was essentially Opera Mini. JavaScript, HTML and CSS were parsed and rendered in the cloud then compressed into a binary snapshot before being sent to the client. The client decompressed and displayed the binary with minimal client side processing.

In Beta 16, Off-road mode works more like turbo mode in the Opera desktop browser. There’s no pre-rendering. images, HTML, CSS and JavaScript are compressed and sent to the client which decompresses, parses and renders everything client side. This change means that off-rode mode should be a lot better at handling the modern event-driven, JavaScript based Web which depends heavily on client side processing.

Opera wants Beta testers to concentrate on testing Off-road mode, so  it’s enabled by default in this version. I switched freely between the two modes and didn’t see any differences in rendering and performance between them. So it seems we are getting reduced data use “for free” with no loss in functionality.

I tested the new Opera Browser Beta on my somewhat dated Motorola Photon 4G, which although it has a dual core processor and 1 GB of RAM, is stuck on Gingerbread due a lack of  display and camera drivers compatible with current Android kernels.

The Opera Beta ran quite well on the Photon except for an annoying and unexpected bug. For some reason the Opera Browser displayed all text on every page using a serif font (image below, left), completely ignoring the font-families specified by the page’s designers.  The font issue seems to be specific to either the Photon or Gingerbread as it didn’t occur on my wife’s Nexus S running Jellybean. 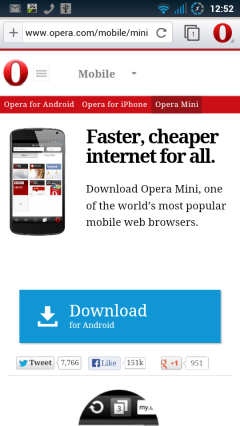 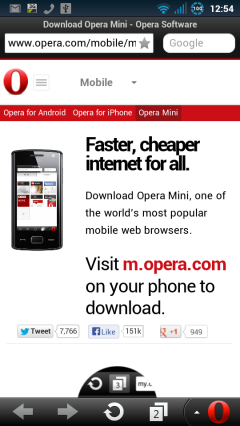 Except for the ugly font issue,  Opera worked pretty well on the Photon with accurate rendering, mostly good usability and smooth scrolling,  although the browser did sometimes freeze for several seconds while loading large pages.

On the Nexus, which has a single core processor and only 512 MB of RAM, performance was a bit degraded compared to Opera Mobile Classic or the Android browser.  Opera Beta performed much  like the Chrome browser on the same phone. It was usable but scrolling wasn’t particularly fluid and moving between fields on some web forms caused the browser to freeze momentarily.

On the more powerful Photon, the browser was usable on every site I tried except Quartz’s qz.com responsive site which is kind of an acid test for mobile browsers. The only browsers I’ve used that Quartz works properly in are iOS Safari and Firefox Mobile. Not surprisingly, the Opera Browser Beta struggled with Quartz, frequently displaying blank pages and freezing when I tried to scroll.

The latest Opera Browser was stable on both devices. In my testing I used the Beta for about 5 hours over several days. The browser never crashed or force closed but a couple of times it encountered an error and displayed a sad cat graphic. In both cases I was able to recover by refreshing the page.

Overall I’d rate the latest Opera Browser Beta a worthwhile upgrade from previous versions. Stability is improved and the new Off-road works properly with many more sites, although it doesn’t seem to be as good at reducing data consumption as the old Opera Mini based one. Over the course of my testing Off-road mode reported that it had reduced data traffic by 60%. The old Opera Mini based Off-road mode typically achieved better than 80% data savings.

In spite of the improvements I’m not ready to make the Opera Browser my daily driver for for a couple of reasons.  The font problem is an obvious show stopper but it it doesn’t effect the majority of devices, just mine.

A bigger problem that effects everyone  is Opera’s lack of proper bookmark management. It’s possible to bookmark the page that you are viewing but there’s no way to edit bookmarks and that means no bookmarklets. I can’t live with a browser that doesn’t support bookmarklets, which I use multiple times every day for things like saving interesting content on pinboad.in, sharing it on social media, translating pages with Google translate, viewing a page’s http headers or its Google Page Rank or a host’s whois information or  fixing a page’s with unreadably low contrast text. You can partially work around the lack of bookmarklet support by installing a bunch of apps, but that adds unnecessary bloat to your device to support something that every other Android browser supports out of the box. 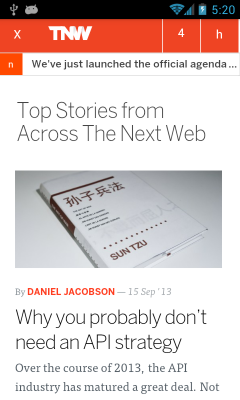 Opera Browser Beta 16 for Android is available in the Play Store for most devices running Android 2.3 or latter.