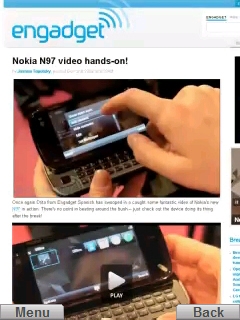 Skyfire has issued an update to the S60 version of their browser.  It’s V. 085.0.8084 and fixes an issue where the phone would prompt you to select an access point three times on start up and again when ever you wake the browser up from a nap.  The latest release only prompts once at start up and once when it comes out of sleep mode. Still not ideal, there needs to be an option to set a default access point, but it’s a lot less annoying than the triple prompt.  The new build is also supposed to fix an issue where Skyfire was not connecting at all for some S60 users.  The Windows Mobile versions didn’t have these bugs and have not been updated. The latest WinMo release is V.085.0.7927.

For more on Skyfire, read the full review.  In a nutshell, this browser is fabulous for video. It can play almost any Flash video or animation on the web, including videos on Engadget as shown in the screen shot.  If you have one of the supported phones you really need to try Skyfire.  You can download it your PC or directly to your phone from get.skyfire.com

UCWEB is a browser from China that doesn’t get as much press in the West as it should.  It’s one of the best mobile browsers available today.  Like Skyfire and Opera Mini, UCWEB is a proxy based browser where pages are rendered on a server and compressed before being sent to a thin browser client. This makes all three browsers very fast and gives them the ability to load the largest full-web sites on phones with limited memory.  What UCWEB has that none of the others do is tabbed browsing, a sophisticated download manager and the ability to copy text from web pages.  I covered UCWEB 6.1 in detail a few months ago and use it daily on my N95 alongside Opera Mini.  I prefer Opera Mini’s rendering and user interface but one window is not enough.  I usually run Opera Mini and also have three or four tabs open in UCWEB. I’ve gone up to six tabs and neither the phone or UCWEB has shown any sign of distress. 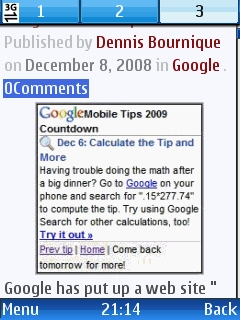 The Chinese edition of UCWEB is now up to Version 6.3.  There is no official English version of either 6.3 or 6.2, but several UCWEB users in India have localized the Java and Symbian S60 3rd ed. variants to English and posted them to the official UCWEB forum.

mannuforall has translated of the Java version of UCWEB 6.3.  It can be downloaded from the first post in this UCWEB forum thread.  I downloaded it to my N95 and it works pretty well.  Sadly the biggest annoyance in Java UCWEB hasn’t been fixed.  When the browser wraps text it splits lines in the middle of words rather than where there is a space which is ugly and somewhat hard to read.

UCWEB 6.3 for Java installs alongside older versions, it does not overwrite them.  I only tried the new version for a few minutes, but it seems to work well, although I didn’t notice a speed improvement.  The English translation of the menus and prompts is complete and reasonably accurate. There are however some links to Chinese sites on the homepage that can’t be removed.  One disadvantage of this Beta is that it uses servers in China which are subject to state censorship. A number of popular sites like My.Opera.com, Vox and Facebook seem to be blocked.  The official UCWEB  English versions use servers outside China and aren’t censored.  Here’s hoping that UCWEB makes an official English version of UCWEB 6.3 available soon.  Thanks to the censorship, I think I stick to the official UCWEB 6.1 release for now. 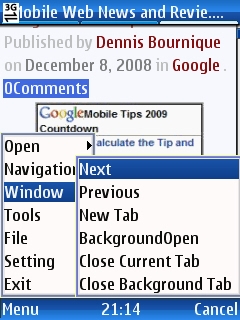 There is also a translation of the S60 3rd edition version of UCWEB 6.3.  It was translated by Akushah and frequent WapReview commenter, jbpseudo.  It can be found here.  Unfortunately it is unsigned so it will only work if you have a hacked phone or a Symbian developer certificate and can sign it yourself.  I have neither so I haven’t tried this version.  I’d really like to be able to use the new release as it incorporates a password manager.

1) Improved Download Manager interface. Downloads are now divided into ‘Downloading’ and ‘Downloaded’ panels.
2) Integration with UCplayer has been optimized.
3) Password Manager has been incorporated.
4) Browsing history has been optimized, with increased size of history and ability to view history via Menu>Open>History
5) Ability to view shortcuts via Menu>Navigation>Shortcuts
6) Improved ‘Back’ option. Even if you request a page that is not in the cache, ‘Back’ will now list the page from server
7) The download manager will now give error codes with the correct description of the reason for the error.
8) Quick toggle between toolbar views via # + 8 key.

Too bad you can’t use it without hacking your phone or paying $200 for a developer’s certificate.  Sorry Symbian and Nokia, this is not “open”.