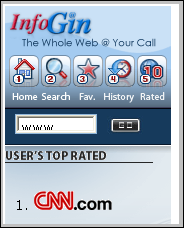 InfoGin (m.infogin.com) is the company that provides transcoder technology to AOL and several mobile operators. I never use transcoders anymore, Opera Mini so much better than any of them. But if your stuck on Verizon with just that Openwave browser, a good transcoder can really open up the web for you.

I found AOL’s transcoder increasingly unreliable when I was using it. The thing seemed to return an error rather than a page more often then not. Perhaps the errors were the fault of AOL’s infrastructure rather than the core technology. Anyway, in my brief tests InfoGin performed well. All the pages I tried loaded quickly and web forms seem functional, I was able to post a comment on this site. 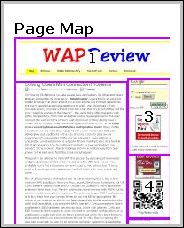 InfoGin has what I consider the two essential features in a transcoder, pages spliting and image resizing. There’s also a primitive form of Opera and the Google Transcoder’s content folding were menus and forms are hidden but can still be reached through a navigation menu.

One great feature of InfoGin that I haven’t seen before in a transcoder is the Map function which works like Webkit’s MiniMap or Opera’s PC View to give a miniaturized view of the of the whole page with each section numbered. A section can be loaded by pressing the corresponding key.

InfoGin also has a voting feature. Users can click a Vote For Site link with the sites getting the most votes featured on InfoGin’s homepage. The top sites mirror what’s popular on the full web including CNN, Amazon, Yahoo, Google, BBC, AOL, YouTube and Hotmail. I am surprised to see YouTube on that list though as you can’t actually view YouTube videos through InfoGin. There are several services that do transcode YouTube and other video site’s Flash movies to .3gp on the fly, I wonder why none of the general purpose transcoders have not incorporated this feature, it would drive lots of traffic their way.

There are only a few things I don’t like about InfoGin but two of them are biggies, I mean really big, namely the huge graphic menus that appear at the top and bottom of every transcoded page, taking up far too much valuable real estate with fluff – including non functioning History, Favorites and Add to Favorites icons. InfoGin is smart enough to hide a transcoded site’s own menus but then replaces them with their own even bigger one.

InfoGin sells their transcoder to operators including Vodafone Italy where all mobile internet traffic goes through the transcoder by default rather than being something the user voluntarily chooses by going to InfoGin’s site. This is similar to what Vodafone UK and Novarra are doing although at least InfoGin doesn’t modify the User Agent. Unlike Google and Mowser, InfoGin is not smart enough to NOT transcode made for mobile sites. I’ve seen one report of a mobile site breaking when accessed through the Vodafone/InfoGin transcoder. I strongly believe that transcoding should be something the user opts into rather than a default unilaterally forced on them by the operator.

No transcoder is perfect but InfoGin looks promising, the map feature especially is neat and useful. It’s always good to have another transcoder as none of the existing ones do a good job on every single site. So if you have some favorite web content that the other transcoders don’t do justice to, give InfoGin a try.