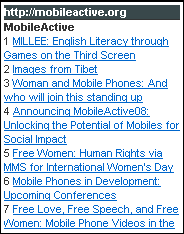 Mobile phones have had a huge effect on society by making interpersonal communication instant and always available. They are also becoming important tools for political and social change.  Here are a few examples:

MobileActive is a must read for anyone interested in social change and mobile technology.  And you can read it on the mobile web. The mobile edition of the MobileActive blog at mobileactive.mofuse.mobi is created from the site’s RSS feed using Mofuse (review) and offers the full text of the ten most recent posts. Since my review, Mofuse has added Mowser integration which means that you can click through to a transcoded version of the full MobileActive blog to leave and read comments on items.