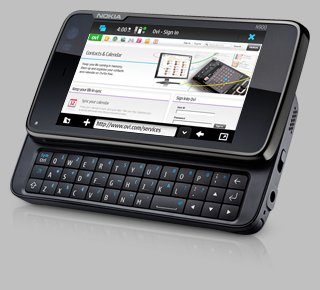 I have to send the Nokia N900 loaner back to Nokia’s WOMWorld tomorrow. It’s a great phone or as Nokia likes to call it, “mobile computer” and I’m going to miss it.

I’ve covered the browsing capabilities of the N900 quite bit here on WapReview but to summarize, the built in MicroB  browser is the best browser available today on any pocketable device.  The combination of 800 x 480 resolution, 3.5 inch screen, high performance JavaScript engine and full desktop Flash 9.4 support means you can really use all the features of almost any desktop or mobile site in pretty much the same way you do on the desktop. I see the N900  as the first of a new wave of phones that blurs the distinction between desktop and mobile browsing.

Take for example video. I send a lot of time in the mobile browsers on my phones keeping up with mobile tech news on Twitter and the RSS feeds of over 100 blogs. There are loads of Flash videos embedded in feeds and linked from Twitter.  I’m no fan of Flash but lets face it you can’t keep up with what’s going on in tech today with out watching a lot of FLVs. I’ve had some pretty disappointing experiences trying to view videos on phones. Sure sometimes they work,  but often they don’t and even when they do it’s generally in the phone’s media player not the browser. With the N900, I quickly became confident that I could click on any video in a tech feed or Twitter and have it immediately start playing in the browser.

OK, so browsing is great on the N900 but what about the rest of the phone?  Here’s what I noted carrying and using the N900 every day for three weeks.

Form factor; The N900 is about the same height and width as the iPhone but about twice as thick and 46 grams (1.6 ounces) or 33% heavier.  When I  replaced my N95 with the N900 in the front pocket of my jeans I barely noticed the difference during my daily routine which includes a fair bit of walking, driving and riding my bike.  Bulk will be an issue for some but I felt perfectly confortable carrying the N900 with me everywhere I went.

Build quality: To me, the N900 feels solid and well put together from quality materials.  There are no creaks or rattles and the screen slides up and down smoothly with no play and stops with a reassuring click at the end of its travel in either direction.  Unlike some reviewers I found the battery cover easy to snap on and off.  In place the cover fit well with no looseness or gaping.

Keyboard: I’m not one of those people who can type well with touchscreen  virtual keyboards.  The iPhone’s to be the best of the bunch but I’ll still take ANY physical QWERTY keyboard over it.  I was a little wary of the N900’s 3 row keyboard with the top row crammed up against the screen bezel.  In fact I rather hated using at first.  But I quickly discovered that I could type quickly and accurately on it by gripping the phone  by the left and right sides with both hands and sliding my thumbs in across the keyboard from the sides.

For two handed entry I’d rate the N900 keyboard as a almost as good as the E71 or BlackBerry Curve, devices I consider to  have the best keyboards of any modern phone.  The domed keys are large and well defined and have light touch with a positive feel.There’s pronounced tactile feedback and a barely audible click when a keystroke registers. I hate keyboards that are stiff, noisy or have a mushy feel and the N900’s is none of those.

It’s even possible to type one handed on the N900 by holding it  from the bottom with four fingers and sliding the thumb around on the keys but this is neither efficient or comfortable. Candybar QWERTYs like the E71 are much better for one handed data entry.  But the N900’s form factor allows for a much larger screen and I’m more than willing to give up one-handed data entry for the bigger screen.

I do wish Nokia had given the keyboard a dedicated fourth number row.  Pressing the function key followed by a number or symbol key works pretty well and the Shift and Fn keys can locked with a double press.  But it looks like a fourth row could have been easily be accommodated by just allowing the slider to move out an extra quarter inch (6 cm) or so.

Display: The screen is gorgeous. Its high pixel density means many desktop sites are very readable and usable without zooming in at all.  It’s a resistive screen but a very good one. Scrolling takes no more pressure than my HTC Magic’s capacitive screen and flick scrolling works as well as on the Magic too.  Activating links and buttons with a finger touch does seem to take a little more pressure. Using the back or tip of a fingernail works better and makes it possible to  tap tiny links and checkboxes quite accurately.

User Interface: The Maemo UI is gorgeous and innovative but I feel it could be more intuitive.  There is a learning curve and it’s not that easy to get up to speed quickly on Maemo by trial and error. Do yourself a favor and read some of the better Maemo reviews and basics articles on the web like these from NokiaExperts and Engadget or heaven forbid, read the manual, which doesn’t come with the phone but can be downloaded (PDF) from Nokia.

Once you get up to speed Maemo is quite pleasurable to use.  Here are  few tips to get you started: 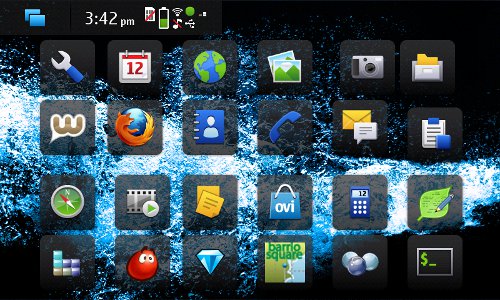 Battery life.  My usage pattern is about three hours a day in the browser, a little Ovi maps usage and only a few calls or texts. I can get by charging just once a day, which is OK for my uses.  To it’s credit, the N900 charges quickly and has USB charging using a standard micro-USB connector.

Maemo: This week’s announcement that Maemo and Intel’s Moblin are being merged to create MeeGo means that the N900 is the last Maemo device.  I love Maemo and I’m not quite sure what to make of this.  I know very little about MeeGo, but am cautiously optimistic that it will build on Maemo and Moblin’s strengths to be better than either.

Maemo is the most exciting new mobile OS I’ve seen in a long time.  I love being able to carry the power of a PC in my pocket. I’m especially fond of Maemo’s openness and security model. By default app availability is limited to a few production repositories, protecting non-technical users from accidentally  installing dangerously buggy or even malicious software.  But geeks can add bleeding edge content by enabling development repos or by clicking on .deb  files in the file manager.  Maemo even trumps Android in openness  by allowing unfettered installation of native apps rather than just sandboxed Dalik ones.

My N900’s stability and performance were first rate. I’ve not had a single OS crash or hang with the N900, pretty remarkable for a new device and a new OS.  And thank you  Nokia for not skimping on RAM. The N900 is the first touchscreen phone I’ve used where I can run multiple apps without worrying about background processes getting killed by lack of RAM.

I am quite concerned that the switch to MeeGo probably means an end to Nokia’s Maemo development effort.  This great operating system will likely always remain slightly unfinished.  I’m really hoping that the N900 will be upgradable to MeeGo, but so far Nokia has not committed to making that possible.

Conclusions: The N900 is  not for everyone.  Fashonistas won’t appreciate its bulk and heft. Typical phone users will likely struggle with the UI a bit and miss the lack of some basic features like MMS and voice dialing. Hardly anyone will really enjoy having to  re-install  the OS in order to remove  their personal information.

But for a geeky blogger like me the N900 is just about the perfect device.  It’s hard to imagine a better phone for content creation and consumption. With a good keyboard, great still and good video cameras, an awesome browser combined with stability, snappy performance and openness and power of desktop Linux with full shell access, the N900 is the ultimate mobile tool for me. 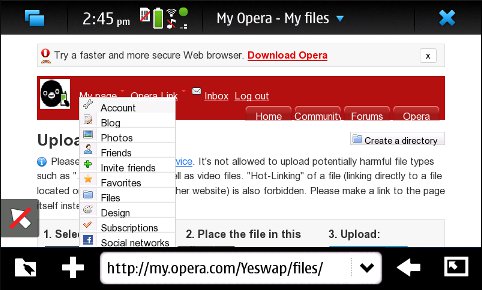 One thought on “So Long N900, Thanks For The Good Times!”