Update 22-Feb-2011: I’m happy to report that Gawker Media has fixed the issue of deep links not working in mobile browsers sometime in the last couple of days. I don’t know if it was in response to my post or something that happened independently but either way, Thanks Gawker! 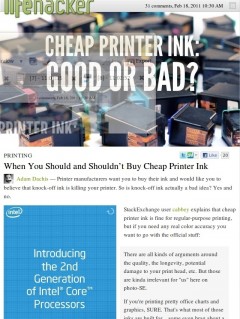 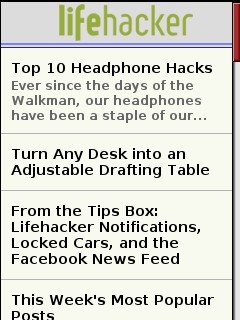 It’s been been nearly two weeks since the big Gawker Media redesign on the online hand wringing over it shows no sign of winding down. On Feb 8th Gawker, Gizmodo, Deadspin, Kotaku, io9 Valleywag, Jezebel and Lifehacker all went from a traditional reverse chronological blog layout to a Magazine or News style design where the front page features a few top stories with the blog time-line relegated to a sidebar list. The new design is also a big departure technically with pages now being generated entirely using JavaScript.

The idea of the magazine format is to keep top stories in a place of prominence for as long as they are news worthy instead on having them pushed down by newer but more mundane items.

Gawker’s taken a lot of heat over the changes. It’s been criticized on many fronts including for being slower loading, particular on old PCs; harder to navigate and “less scannable“. There’s also some evidence that the redesign has reduced traffic to the sites.  Technical types have had a field day arguing whether or not the sites’ reliance on JavaScript and use of  “hash bang” URLs are reliable and performant.

Personally I like the redesign, at least on the desktop. I haven’t seen any performance problems on either my modern low end laptop running Ubuntu or a five year old Windows XP desktop. Magazine style layouts are hardly new or unusual and are used by many top news and gossip blogs including TechCrunch, OMG and the Huffington Post.  The new layout makes sense to me for showcasing the sort of sensationalist top stories that are the Gawker sites trademark.

But there is something  about the Gawker redesign that I am really annoyed with. Gawker has essentially killed their mobile sites with this change. If you are using any mobile browser, clicking a link to Gawker Media story posted on Twitter or another site will take you the Gawker (DeadSpin, Lifehacker, etc.) mobile front page rather than to the item you were expecting. For example the Lifehacker cheap printer ink story (image top left) is a featured item on the desktop homepage. Its permalink is lifehacker.com/#!5763914/when-you-should-and-shouldnt-buy-cheap-printer-ink Opening that link in a mobile browser loads the Lifehacker mobile front page (image top right) with the ink piece nowhere to be found.

That’s breaking Thematic Consistency, the principle that a URL should lead to essentially the same content (reformatted in necessary) regardless of which browser is used.  By not showing the user the content they asked for  Gawker is breaking the Web’s most important feature, hyperlinking.  I suspect that the link breakage and resultant poor user experience user experience has lead to a steep reduction in mobile page views and the time that mobile users spend on the sites.

8 thoughts on “Update Fixed! – Gawker’s Redesign Lands It In My Mobile Thematic Inconsistency Hall of Shame”