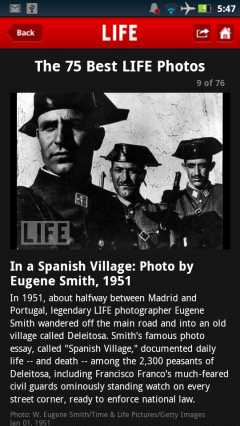 Before TV and the Web, LIFE Magazine was the biggest thing in mass media.  The large format pictorial news weekly was the best selling magazine in the US with a weekly circulation of over 13.5 million in the 1940’s.

LIFE played a major role in the development of the craft of photojournalism.  It published many of the best photographers of the 20th Ccentury including Alfred Eisenstaed, Robert Capa, Margaret Bourke-White, Andreas Feininger, Dorothea Lange, Gordon Parks, W. Eugene Smith and Edward Steichen.

Unable to compete with television, LIFE ceased publication as a weekly in 1972. It resumed several years later as a monthly and published its last issue in 2000.

In 2009, LIFE’s parent, Time, Inc., launched LIFE.com as a joint venture with Getty Images. The site draws from the combined LIFE and Getty photo archives of over 10 million images to create a revolving gallery of some of the best current and historic news photos on the Web. The image archive is also searchable.

LIFE’s mobile site is more of the same in a smaller scale. It includes image search and a rotating gallery arranged by topic.  Formatted for a minimum screen width of 320 px and with page sizes of up to a megabyte, LIFE Mobile works best with smartphone browsers or Opera Mini on large screened feature phones.