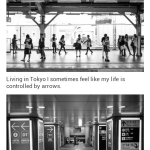 New Mobile WebApp Added to the Wap Review Directory Mobile Link: shoottokyo.com Rating: Content  Usability  Doctype: html Home Page Weight: 1074 KB (787 KB compressed) Category: Images Description: A photography blog from an American named Dave who has lived and worked in Tokyo for over a dozen years. The site is filled with great photos not just of Tokyo but also from places around the world that Dave’s day job in the tech takes him. The blog’s not just photos either, all … Continue reading → 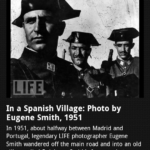 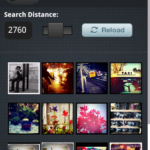 A new location aware mobile web app that displays photos taken near your current location. The photos come from the popular iPhone photo taking and photo sharing app Instagram using the later’s public API. Most are altered using Instagram’s arty (some say cheesy) filters. Pictures are displayed as a grid of thumbnails. Taping a picture shows it full-screen along with when and where it was shot and the photographer’s name and avatar. A slider lets you alter the range that … Continue reading → 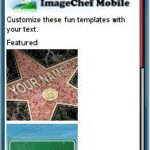 Ever wanted a personalized license plate? Your own  star on Hollywood’s Walk of Fame? How about seeing your message on one of those big track side signs at a Formula One circuit? Now that would be cool! ImageChef Mobile is a free service that lets you add your own message to a large collection of stock images. It’s very easy to use. Just visit m.imagechef.com with your phone’s browser, select an image template, type in your message and press the … Continue reading → 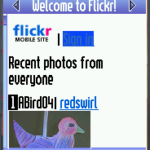 Flickr recently rolled out an updated version of their mobile site at m.flickr.com. When I first reviewed Flickr Mobile I found it limited but useful. This update removes most of the limitations I mentioned. Photos are now searchable by tag or description and new links give you more options for viewing your contact’s photos. One of the best features of Flickr Mobile, the ability to upload photos directly from your browser, has been retained. Browser uploading only works from certain … Continue reading → 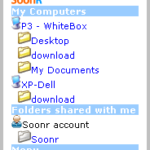 SoonR is hardly new but I never really looked at it until now. A demo at Mobile 2.0 opened my eyes to what SoonR can do. It’s a unique application and web service that uses your mobile browser to really extend your phone’s capabilities in may ways, not the least of which is making cheap International calls using Skype and accessing your PC’s files and Outlook. After you sign up for the free service, and install a small application on … Continue reading →

This isn’t new but I just discovered it. Flickr has a mobile site! It’s a beta and pretty basic but fun if you have a Flickr account or know someone who does. There’s no need to login to use most of the features of the site. You can see the latest public photos posted to Flickr – which amounts to a constantly changing random assortment of images – most of them unfortunately not very interesting. If you have someone’s Flickr … Continue reading →