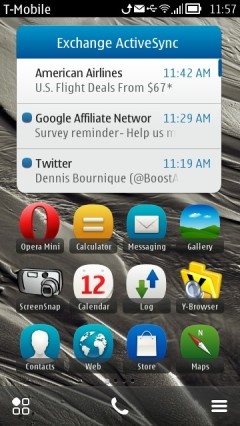 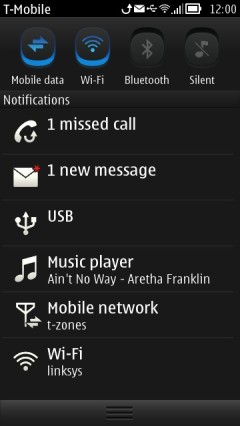 Belle, the latest OS upgrade for what used to be called Symbian phones, was released yesterday in most markets for the C6-01, C7, E6, E7, N8, X7 and Oro. Update: Belle for the Nokia 500 was released Feb 15.)  I was pleasantly surprised  to see that updates for US phones were available on the first day of the rollout. This is a welcome change from the Anna release which came to North America months after it was available in most countries.

As of today it looks like Belle is available in most of the world for most devices and product codes. Notable exceptions include Canada, Australia and Israel where Belle isn’t available for any variant yet. Nokia has a Web page where you can check availability by country and product code.

The Belle update can’t be installed directly to the phone over the air. A PC is required.  Hopefully this will change for the millions on mobile users without a PC.  I run Ubuntu Linux on my PC so I had to fire up my dusty old Windows PC to get it. I’d always used the lean and mean Nokia Software Updater (NSU) for phone updates but when I fired it up I got a message saying “You must use Nokia Suite 3.3 or later to update your N8.” So I launched Nokia Suite which seemed to run better than I remember and did the update in about 30 minutes unattended.

Here are my initial impressions.

Heed the warning to backup your phone! The Belle update didn’t preserve very much of my existing data. I lost every app that I had installed, including ones installed on the E: drive. I also lost all my Notes. At least photos, contacts, saved text messages and browser bookmarks survived the upgrade.

Belle looks and feels a little like Android with a redesigned status/notification bar at the top of the screen (image above, left). Icons appear in the bar to notify you of new texts, missed calls and updates for preinstalled apps. Just like with Android you can drag the bar down to reveal a “drawer” with widgets that let you act on alerts. There are also widgets that let you adjust Bluetooth, WiFi and USB settings (image above, right) as well as handy buttons for toggling Mobile Data, WiFi, Bluetooth and the Silent profile. I’m rather disappointed that there is no email notification icon for the status bar.  As before, the only notification of new incoming email is an alert tone. As far as I know there isn’t any way for third party apps like Twitter clients to add notifications to the status bar either. 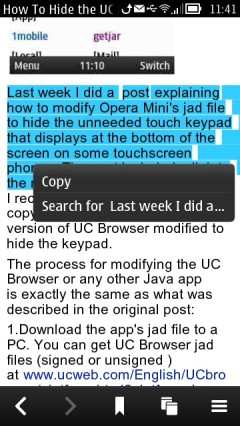 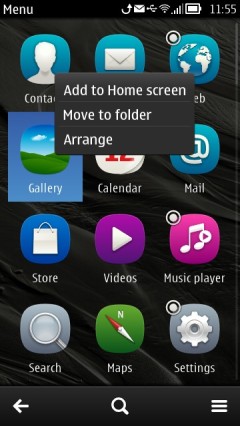 Better Performance. Belle is even snappier than Anna, which itself was an improvement on PR 1.2. For example:

There’s a lot more that’s new in Belle including new Camera and Browser user interfaces. All About Symbian, as usual, has a very comprehensive piece on Belle that includes a full change log.

There are supposed to be some browser performance improvements as well. I’m planning to write a post covering the browser in depth, including benchmarks and site compatibility testing. 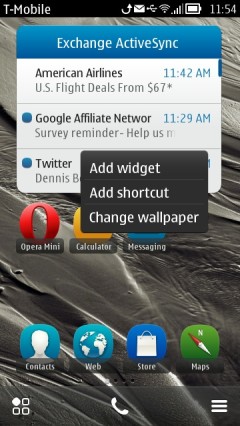 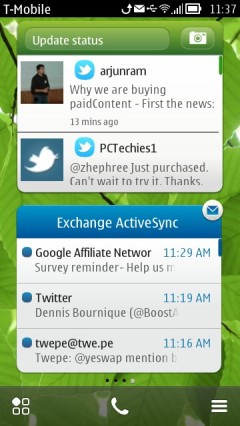 9 thoughts on “Nokia Belle On My N8 – First Impressions”