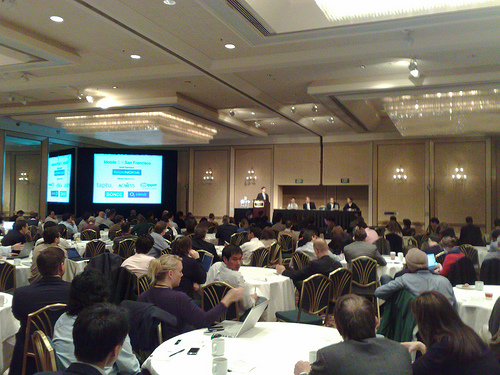 Today was the 3rd annual Mobile2.0 Event in San Francisco. This is my favorite mobile conference, fast paced, intimate and  with a no PowerPoint rule!

Mobile 2.0 always seems to draw the best presenters and the attendees are a nice balance of developers and entrepreneurs from the Americas, Europe and Asia.  This year’s event was no exception. Kudos to the organizers: Daniel Appelquist from Vodafone; Gregory Gorman, Tertius; Mike Rowehl, Skyfire, Peter Vesterbacka, Some Bazaar and Mobile Monday and Rudy De Waele, dotopen / mTrends for pulling together so many great speakers and panelists, keeping a grueling schedule on time and generally making Mobile2.0 a fun and rewarding experience.

This year’s event used a new format  with an all day Business Track and a separate afternoon only development oriented Builder Track.  I attended the morning half of the Business Track and the Development Track in the afternoon. There was just too much to cover in one post so I’m splitting my Mobile2.0 report into two parts. This post covers the morning session.  Part 2 covers the Builder Track.

The Day started with an brief introduction from Gregory who said he hoped Mobile2.0 would help the attendees to learn how to continue to innovate in the face of a global recession.

David Wood from Symbian gave the keynote on why Symbian was going Open Source. David started by channeling Steve Balmer,  saying it was about “Developers, Developers, Developers”.  To solve hard problems mobile needs to engage developers and the open source world has a huge pool of productive and engaged developers.

According to David, Symbian is on target for an initial release of substantial parts of the code under an Eclipse Public License in the first half of 2009, with full code release by June 2010. Some of the code will be under be under a Symbian Foundation License and will only be available to Symbian Foundation members but the cost of membership will be nominal; on the order of a few hundred of dollars per year.  David announced that the annual Symbian Partner Event,  which will held in San Francisco on Dec 4, 2009, will be open to non-members for the first time. Details at SymbianPartnerEvent.com.

The panel on  Mobile Browsers; “How Is Web Different On Mobile Devices?” was my favorite of the morning session. It featured representatives from four major browser vendors; Opera, Access Netfront, Skyfire and Mozilla. The moderator was Vodafone’s Dan Appelquist who lost his voice midway through the panel but soldiered on croaking his topics and questions in what sounded like considerable pain.

Opera‘s Taksuki Tomita went further saying that in his experience many users prefer using full desktop web sites on their phones and get quite angry when sites force them to use mobile version. The panel agreed that if a content provider offers a mobile optimized experience they also need allow mobile users the choice of viewing the full desktop version as well.

A common theme across the panel was that web apps and browser based widgets were the future of mobile application development.  Standards are very important to avoid fragmentation of this new platform, particularly standardized JavaScript APIs for access to phone features like location and contacts. Mozilla‘s Jay Sullivan felt that signed widgets are perhaps an interim step in the direction of eventual direct browser access to device resources.  Offline mode with local storage is also essential if web apps are to replace native ones. Mozilla, like Gears, will support SQL Lite for local data storage and Skyfire will adopt the W3C HTML5 standard for offline storage an synchronization.

A panel consisting of John Faith, MySpace; Henri Moissinac, Facebook Mobile; Sumit Agarwal, Google; Ilja Laurs, GetJar and Michael Bayle, Yahoo next discussed “Platforms, Monetization & Third Party Applications”. A core issue was how to monetize? – ad supported versus user paid models like subscriptions and paid applications. Ad supported seemed to be favored by most of the panelists with the caution that it requires huge scale to be successful. Selling to users only works for content that is both compelling and exclusive.

During the lunch break I had a long chat with Taptu CEO Stephen Ives about the year old entertainment oriented mobile search engine. Taptu takes a unique approach to search with queries being processed by up to 12  “channels” each optimized for a particular subject area such as music, images, Wikipedia, news, PC web and mobile web.  Each channel has it’s own algorithms and techniques.  Some work against databases created by Taptu’s subject area specific crawlers. Other channels, like the web search, leverage  public APIs from Yahoo and  Microsoft.  The output of all the channels is filtered and combined to deliver a relevant set of results optimized to the user’s handset.

Taptu announced today that ItsMy had chosen Taptu as its search provider.  That’s a big win for Taptu, ItsMy is one of the largest pure mobile social networks with over 2 million users. Steven said the ItsMy deal is one of several big partnerships that Taptu will be announcing over the next couple of months.

I questioned Stephen about traffic and the size of Taptu’s user base.  While he wouldn’t quote specific numbers, he did say that Taptu’s goal for the first year was to archive a sizable user base and that they had met that goal. Stephen mentioned that Taptu needs 60 servers to support current traffic and that number is growing rapidly.

I feel that Stephen and Taptu really understand the mobile search space and are taking a very innovative and effective approach.  The company is clearly focused on optimizing the user experience. Taptu’s target is to deliver the “best result for your handset ” in less than 30 seconds and fewer than 12 clicks or scrolls.  To optimize search results Taptu has a twelve person “search quality team”, almost a third of the companies 38 employees, whose job is evaluate the quality of Taptu’s search. Suboptimal results are analyzed and used to fine tune the algorithms. That kind of dedication to quality is pretty impressive.