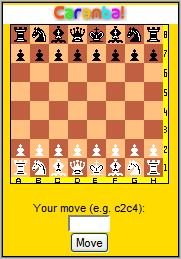 I just discovered a nice mobile site that lets you play computer chess on just about any phone with a mobile browser.

It’s called Caramba! and the URL is m.mountmobile.com. When you vist the site it displays a chessboard and prompts you for your move.  Moves are entered using a simplfied form of chess notation  where you specify the from: file and row followed by the to: file and row.  For example “c2c4” means move the piece on file c, row 2 to file c, row 4.  The files and rows are labeled on the screen and the site won’t let you make an invalid move.

There are four skill levels to choose from; Beginner, Intermediate, Experienced and Grandmaster.

You can save an unfinished game by bookmarking the page, the URL contains a session ID so that when you return to the bookmarked page the board reloads just as you left it.

Caramba! responded very quickly to moves and consistently trounced me at the beginner level; which isn’t surprising since I haven’t played chess since my college days.  Any chess wizards among my readers who want to try Caramba!  and give an opinion? Source: Tappity

4 thoughts on “Play Chess on the Mobile Web”