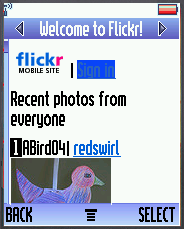 Flickr recently rolled out an updated version of their mobile site at m.flickr.com. When I first reviewed Flickr Mobile I found it limited but useful. This update removes most of the limitations I mentioned. Photos are now searchable by tag or description and new links give you more options for viewing your contact’s photos.

One of the best features of Flickr Mobile, the ability to upload photos directly from your browser, has been retained. Browser uploading only works from certain phones, mainly Nokia’s, but if you have a compatible phone and an unlimited data plan it makes uploading photos essentially free. For the rest of us, Flickr also supports uploading by MMS. The new version of Flickr Mobile even uses access keys for every link making navigation very efficient.

This is generally a nice upgrade but there are issues – mainly centered around logins. There are a couple of different issues with logins. Flickr has two types of logins, users who signed up before August 15, 2005 and haven’t upgraded still use their old Flickr login, which can be any email address. Anyone who signed up after that date has to use a Yahoo id which in the case of users of Yahoo partners like ATT is also an email address. The Flickr PC site accepts either type of login but the new version of the mobile site only takes Yahoo logins. This is a change from the previous version of Flickr Mobile which accepted only Flickr logins. I had a Flickr login so I had to do what Yahoo calls “merging” my Flickr and Yahoo accounts which turned out to be a rather frustrating process. When I tried to merge the ATT-Yahoo account whose email address I had always used to login to Flickr, Yahoo couldn’t complete the process saying that my login was invalid. To get it to work I had to change the email address that my legacy Flickr account was tied to. Once I did that I was able to merge my ATT-Yahoo account to my Flickr account.

A more serious login problem is that users of phones with the Motorola MIB browser may not be able to login at all. I don’t have one of these phones so I can’t be sure, but it’s definitely broken using Motorola’s MIB emulator. Clicking the login link just brings up a blank page. I think the url to the login page is too “complicated” for this rather brain-dead browser to handle.

The screen shot shows yet another issue with Flickr Mobile and the MIB browser. That blue rectangle next to the Flicker logo is a link labeled “Login”. You can’t read it because Yahoo tried to change the links to Flickr’s special shade of blue. The same thing happens to other links when they are selected. It’s risky trying to change link colors on mobile pages as several popular browsers have bugs in this area. For mobile web developers, there’s more on this issue here and here.

Except for the login issues, this is nice upgrade to Flickr’s mobile functionality. Flickr mobile is a great way to entertain your friends and acquaintances with your vacation photos anywhere, any time. Flickr Mobile is on the Yeswap.com mobile portal in the Entertainment folder.
Flickr Mobile: xhtml-mp
Content: