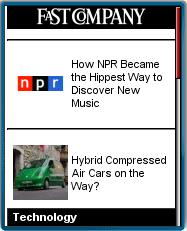 Fast Company is a print and online business magazine focused on technology, innovation and social responsibility.  And now there’s a mobile version of Fast Company at m.fastcompany.com. It seems to include almost all the articles fromFast Company’s full-web site.

The mobile web design, which is by Crisp Wireless, generally does a good job of resizing images and splitting up pages so that the site works on anything from the iPhone to old wml-only devices. A lot of mobile web development shops seem to focus on high-end devices and end up producing pages that won’t even load on the feature phones that account for 70% of mobile web use according to Comscore.

I do have one beef with the mobile version of FastCompany.  Where are the videos? FastCompany is probably best known on the web for its video interviews of tech luminaries by Robert Scoble.  The videos are hosted on FastCompany.tv but linked to from the main site.

Scoble recently left FastCompany, reportedly after Seagate declined to renew its $1 million/year sponsorship of Scoble’s show. It looks like video production at FastCompany has totally halted after Scoble’s departure with no new videos released since March 5th. Video was such a major part of FastCompany’s online content, I hope this doen’t mean the end for fastCompany.tv. I’m also disappointed that the previously produced videos don’t seem to be available in a mobile friendly format. Source: Oh! Mobile Directory.

2 thoughts on “Fast Company Goes Mobile But Where Are The Videos?”