Social Bookmarking with popularity rating – what Digg does – but for mobile web sites is what TapTap, Mobilised and :bMarks are about. There’s a tremendous of interest in the mobile web right now with new mobile sites appearing daily. But discovery is a problem both for mobile users and publishers. There’s a need for a place were users can recommend sites and let the crowd vote to determine which ones are most worthy. 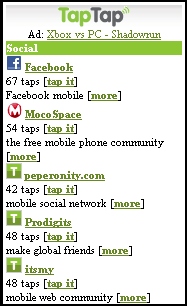 TapTap (m.taptap.net/) is from AdMob. I linked to in Found on the Mobile Web #18. It’s Digg-like in that visitors submit mobile sites and Tap (Digg) the sites they like. TapTap can also be used as a portal, searching and browsing sites by category like Sports, Ringtones, News or Local. Registration is not required to submit or Tap sites however the submission process appears to be moderated. I submitted Yeswap.com several days ago but it hasn’t shown up in TapTap yet.

The TapTap front page lists the “hottest” sites with the number of taps each has received. I don’t understand how hotness is determined. I’d expect it to be based on the number of taps but it’s clearly not – there are sites with only a few taps on the front page and others with thousands buried of back pages. Speaking of buried, TapTap has no equivalent of Digg’s bury. I’m not sure if that’s good or bad. Burying is such a negative concept yet it’s what gives users a way to deal with SPAM and excessive self promotion of sites by their owners.

Although it’s not required, registration is worthwhile because it gives you a MyTapTap page which is a directory of the sites you’ve tapped and submitted. Registered users can also use TapTap’s notes feature. You can create a note on TapTap’s PC web site at www.taptap.net and it shows up in the My Profile > My Notes section on the mobile site. The notes would be more useful if the were also editable on the mobile site though.

TapTap is an interesting site but AdMob doesn’t seem to be doing much to promote it. I like the openness (anyone can tap) but fear this is easily exploitable using bots, TapBots if you will, to drive spam and scam sites to the top of the rankings. There’s no way to bury a malicious site or to report spam. The moderation seems to be working though as I haven’t see any SPAM on TapTap.

The main thing that’s holding back mobile social bookmarking is the dificulty of entering url’s and site descriptions using a phone keypad. Even demon texters are seriously slowed by the use of special characters in urls like / . ? = and & and by the absolute accuracy that entering a url requires. Bookmarklets solve that problem, at least for Opera Mini users. I’ve heard that recent versions of Windows Mobile’s Internet Explorer support bookmarklets too. I’m so used to using bookmarklets to post to del.icio.us from Opera Mini that i can’t imagine using a bookmarking site that didn’t support them.

TapTap doesn’t supply a bookmarklet and I was unable to create one that worked – too bad.

I was recently tipped by readers about two new sites that are even closer to the Digg model, thanks Dean and Jorge. And both of them offer bookmarklets!

:bMarks (bmarks.mobi/) is pretty much a pure Digg clone, the :bMarks equivalents of Digg and Bury are Bump and Dump and like Digg you can leave comments on listings. Sites are displayed by number of Bumps in the past 1, 7, 30 or 365 days and the results can be filtered to only show sites in specific categories. :bMarks users seem to post breaking news stories from mobile news sites quite a bit. 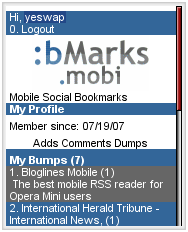 :bMarks supplies an Opera Mini Bookmarket which can be downloaded from the site directly to your phone. Full instructions are provided. The bookmarklet not only passes the url and name of the current page but also the description meta tag, if the site has one, which is cool because it fills in the description field for the site on :bMarks. Unfortunately, the :bMarks bookmarket is too long to work in Opera Mini on some browsers including my Motorola 1855. That phone’s Java implementation limits text fields to 250 characters. I’ve edited the :bMarks bookmarklet by removing the description to make it small enough to work on my phone and others with similar limits. Both versions are posted on o.yeswap.com ready for you to download into Opera Mini or Mobile IE. 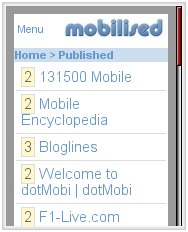 Mobilised (mobilised.net/) is the third new mobile bookmarking site. Mobilised works like :bMarks (or Dig), anyone can browse and search the directory but you need to be registered to submit sites, Vote (the Digg equivalent), Bury or comment. The site’s front page, labeled Published lists only sites that have received votes, although strangely they aren’t in order of most votes. A link at the bottom of the page, marked Upcoming leads to a much longer list of sites that have been submitted but have not received any votes. There are a few categories and you can filter the results to sites submitted in the last day, week or month. You can also search Mobilised and there’s a Tag Cloud. The cloud looks especially nice if your browser supports varying font sizes like the Opera Mini 4 Beta does.

Mobilised is full featured and visually quite attractive in a low key way. But I really don’t get some aspects of the way it works. The separation of the Published and Upcoming lists for example. Or the fact that sites are not listed in order of most votes in any of the lists or results. What’s the point of voting if it doesn’t move the site I vote for up in the listings?

I like the concept of social bookmarking with voting and comments. But for it to take off in mobile, more browsers need to support bookmarklets. Among the mobile browsers that I’ve tried only Opera Mini and IE Mobile do. Even Opera Mobile 8.65 on the new Motorola Z8 doesn’t. They don’t work in NetFront 3.1 and 3.2 either. I wonder if WebKit on the iPhone or S60 supports them?

Of these three sites, I prefer :bMarks –  it’s the easiest to use and the only one of the three that actually lists the most recommended sites first. I’m going to give it a try as a replacement for del.icio.us as the place I post new mobile web sites that I find.