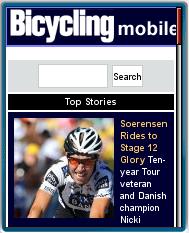 Thanks to a tip from a Wap Review reader I discovered that Bicycling Magazine has a slick mobile site with live Tour de France coverage. It also features general cycling and cycle racing news and regular reports from the Bicycling Magazine columnists.

In addition to live Tour coverage, which only seems to appear on the site while a stage is in progress, there’s a dedicated Tour section with features on individual riders, a look at some of the Tour bikes and prognostications on future stages and potential winners. Bicycling’s executive editor Bill Strickland, is predicting a victory for Armstrong. Maybe, but there is a a lot of racing ahead and at least a half a dozen other riders are still very much in the hunt for the maillot jaune.

The site design by mDog is attractive and generally quite usable although there is some sort of encoding or mime type issue that causes “garbage” characters to appear in some of the stories. I’m also concerned that the 65 KB size of the site’s home page may be too much for some legacy mobile browsers and users with slow connections or metered data plans.