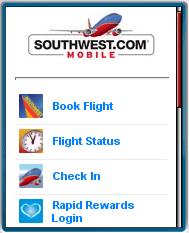 One of my readers suggested I take a look at Southwest Airline’s new mobile site. Back in 2006, Southwest was one of the first airlines to offer mobile web based online check in. Until recently however, check in was about the only thing you could do on the Southwest site.

That’s all changed with the latest redesign. The new Southwest site not only lets you check in but also offers mobile users a full range of online services including flight booking using a credit card, checking flight status and interactive schedules. Members of “Rapid Rewards”, Southwest’s frequent flier program, can login to their MySouthwest account using their mobile device to view scheduled trips and check their rewards status.

Online check in works as before and is quite easy. You enter your flight confirmation number and name and that’s it, you’re checked in. You do still need to stop at en eTicket kiosk at the airport to print your boarding pass. 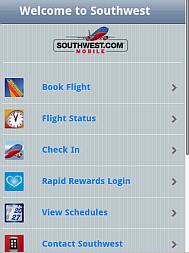 In this regard Southwest is a bit behind the curve as several airlines including American, Continental, Lufthansa, SAS and Air Canada are now sending electronic boarding passes encoded as 2D barcodes to mobile users who can simply scan their phone screens at the security checkpoint and gate.  This technology is part of  an IATA standard called Bar Coded Boarding Pass (BCBP).  With BCBP scanners scheduled to be rolled out to security checkpoints at all US airports next year I’m hoping the Southwest will be quick to adopt this time saving technology too.

The new site has two variants. There is a slick iPhone specific one and a more generic mobile view for other devices. The two versions, which are served from the same URL, have exactly the same functionality, differing only in their level of eye candy. I’m running Cyanogen’s 4.0.4 ROM on my Google Ion Android phone which includes a modified browser that lets you change the user agent header to impersonate the iPhone. The iPhone version of the Southwest site seems to work perfectly in the Android browser, although users of un-modified Android phones will not see it. I wish more web designers would wake up to the fact that the rendering and CSS and JavaScript support of the Android browser is almost identical to that of the iPhone and that most iPhone web apps will work well and look good on Android phones.