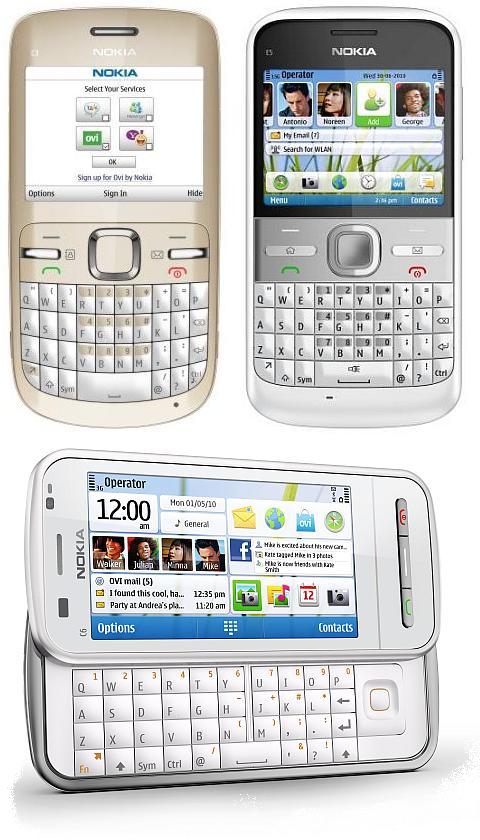 Last night Nokia announced three new moderately priced QWERTY phones that look very impressive. The thing that stands out to me is the amount of advanced functionality Nokia has crammed in at such low price points. There’s the $122 (list) C3 (top left), a  BlackBerry styled 2.5G S40 with WiFI, music player and WebKit based browser.  The $244 E5 (top right) is similar to the $469 E72 but with twice the RAM,  an even better keyboard and a bigger battery. Rounding the bunch is the $299 C6 (above),  which I see as  an updated N97 Mini at just over half the original’s $579 list price!

Assuming Nokia can make a profit at these prices the new phones are a very smart move by the world’s largest handset maker.  With a better browser and WiFi the C3 trumps all the similarly priced quick messaging phones from the likes of LG and Samsung.  The C6 and E5 continue Nokia’s recent efforts to push Symbian to ever lower price points that started with devices like the E63 and 5320.  But those phones needed a compromised feature set (2MP cameras, no WiFi on the 5320 and no GPS on the E63) to achieve a low price point. The E5 and C6 are fully speced out with 5MP cameras, HSDPA, GPS and free Ovi Maps navigation.  The E5 has 256MB of RAM, twice as much as any previous Nokia Symbian phone. The increased RAM should finally put an end to the low memory issues that have bedeviled power users on recent Nokia smartphones.

The C3 and C6 should be available in June, with the E5 dropping by September.