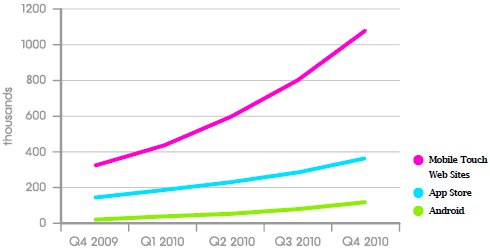 In the latest report (PDF) Taptu compares the size and growth rate of its Mobile Touch Web index with that of the iPhone and Android appstores.   By Taptu’s count there are currently:

In terms of growth, based on numbers from the last four months:

Not only is the Touch Web growing faster than iPhone apps but it is also growing twice as fast as Taptu projected in January. Taptu now expects the number of  Mobile Touch Web sites to reach 1.1 million (up from their previous prediction of  0.5 million) by the end of 2010.

Incidentally, the majority of the sites Taptu calls ” Touch Friendly”  work just as well with the browsers on  non-touch phones. Touch can definitely enhance the mobile browsing experience but it is not a requirement to use the modern mobile web.

Coincident with the release of the latest report, Taptu together with mSearchgroove‘s Peggy Ann Salz have put together a Mobile Touch Web “Virtual Roundtable” in which a number of industry experts were asked to share their thoughts on various aspects of the Touch Web.  I’m proud to be a part of the Virtual Roundtable which is available now  on Slideshare.