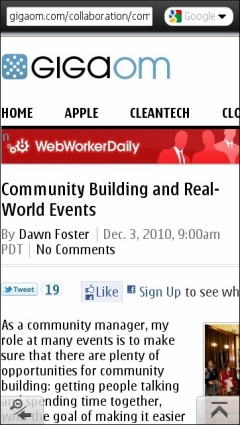 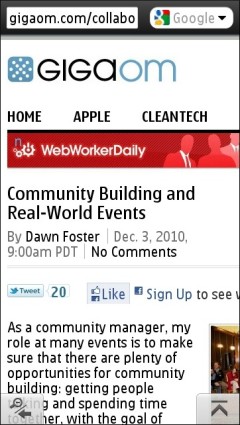 A second beta of  the native Symbian (.sis) version  of Opera Mini 5.1 was released yesterday.  Among other things it fixes two significant bugs from the first Beta.

According to Opera, other changes since Beta 1 include:

While it’s not perfect, the new Beta is good enough for me that I’ve switched to using it instead of Opera Mobile or the Java version of Opera Mini on my N8.  The biggest advantage of the Opera Mini Symbian version over the Java one  is that with it copy and paste use the OS clipboard  rather than an internal Opera one.  This makes it much easier to copy and paste text between Opera Mini and other apps on the phone. As for Opera Mobile, it’s a great browser in most respects and I’d like to use it more but don’t because it doesn’t wrap text properly on a some of my favorite sites. The native app also seems to launch and load pages a little more quickly than the Java one.  Plus the Java version has a long standing bug that if you opt to use the native keyboard it’s  impossible to change search engines in  the URL bar search box.  The native client is missing that bug. There are still a couple of areas I’d like to see improved in Opera Mini for Synbian. The main one is that the font Opera uses for menus and other UI elements  in the Symbian version (image above, left) is much smaller than the one used in Java Opera Mini (image above, right).  With my old eyes it’s just barely readable.  That’s not a big deal in the menus, which I know by heart.  But if you choose to use the Opera keyboard, which includes a nice portrait QWERTY option, instead of the native Symbian one the  tiny font is also used for the URL entry field.  That coupled with the lack of arrow keys on the Opera keyboard makes positioning the cursor accurately on a particular character while editing URLs nearly impossible The font size issue is easily fixed by setting Opera Mini to use the Symbian keyboard. To switch, go to Opera Mini’s  “Settings” menu, tap “Advanced“, then tap “Opera keyboard” and choose “Never“. The disadvantage to using the Symbian keyboard is that in portrait orientation you are stuck with Nokia’s 12 key T-9 keyboard.  The T-9 isn’t that bad (some people actually claim to prefer it!) but I’d take Opera’s QWERTY over it but for the text size issue and lack of arrow keys. Both problems will be solved if and when Nokia and Swype come through with the promised QWERTY portrait keyboard. The new Beta Supports Symbian 2nd, 3rd and 5th edition and Symbian^3 devices.  Download it from m.opera.com on your phone or opera.com/mobile/download/pc/ using your PC browser.  In my opinion it’s the best Symbian browser available and is especially recommended for Symbian^3 users.