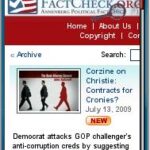 FactCheck.org is a non-partisan, non-profit project from the Annenberg Public Policy Center at the University of Pennsylvania. It researches and debunks false claims made by U.S. politicians and political action groups in campaign materials, speeches and in promoting legislation. FactCheck has played a significant role in recent U.S.elections. In the 2008 presential campaign Factcheck.org flagged multiple falsehoods by both candidates, including Obama’s statement that McCain’s Social Security proposal would cut retiree benefits by 50% and McCain’s claim that Obama lied … Continue reading →