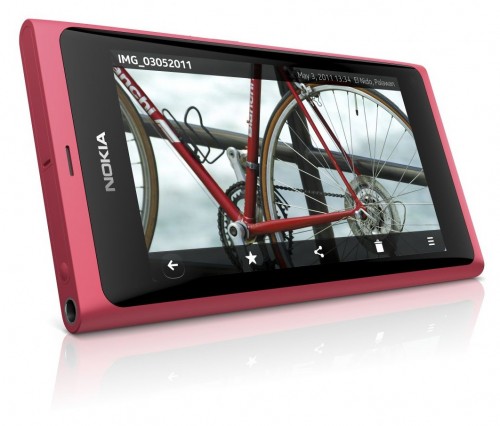 Today at Nokia Connection in Singapore Nokia introduced its long awaited MeeGo handset, the N9. It’s a sleek, slim and seamless stunner with a body carved from a single piece of polycarbonate plastic. The 3.9 inch (854×480) screen occupies almost the entire face of the phone. The glass screen curves gently into the body at the sides and the only keys are a volume rocker and lock switch on the right side.

The user interface as demoed in the video above is unique and very attractive. There are three vertically scrolling home screens; the first is an application launcher consisting of  grid of icons representing all your installed apps, the second is a task switcher showing running apps and allowing you to switch between them or terminate an app or all apps. The third screen is dedicated to notifications such as missed calls, texts, emails, Twitter mentions, Facebook Chat requests, unread RSS feed items etc. The phone’s lock screen also displays notification indicators. A horizontal swipe in any direction switches between home screens.  Sliding a running app off the screen in any direction reveals the last viewed home screen and puts the app in the background. In the demo videos I’ve seen the UI looks to be very intuitive and easy to use.

A neat feature is the inclusion of NFC based “tap to pair” technology that lets you connect the phone with an NFC equipped Nokia Bluetooth headset or speakers by simply tapping the phone on the audio device.

Although Nokia refers to the N9’s OS as  MeeGo 1.2 Harmattan, the developer documentation suggests that Harmattan is actually the latest iteration of Maemo, Nokia’s open source Linux OS, and a direct desendent of the N900’s  Maemo Freemantle. Harmattan does support most MeeGo APIs so porting a MeeGo app to Harmattan should be relatively easy. Like Freemantle, Harmattan uses  the .deb application packaging format rather than MeeGo’s RPM so at least a re-ppackaging is needed to a MeeGo app running on the N9. There’s also Qt support facilitating the porting of Symbian Qt apps.

The N9’s specs are good if not spectacular. The CPU is a single core 1 MHz ARM Cortex-A8 OMAP3630, which is close in specification (same CPU core and similar GPU) to the A4 CPU used in the iPhone 4. In the demo videos I have seen the user interface seems very fluid and responsive so it appears that the CPU and graphics subsystem are up to the task. While some may bemoan the N9’s non-removable battery and use of a micro-SIM, the pentaband 3G radio is a win for globe-trotters and North American users. The camera also looks very promising. It’s an 8 MP device with an auto focus (thankfully not EDOF) Carl Zeiss lens.

Although pricing hasn’t been officialy announced, Nokia’s Executive VP of Sales Colin Giles told Cnet Asia that the Nokia N9 will set you back $660 for the 16GB model and $749 for the 64GB That’s remarkably similar to the iPhone 4’s unlocked price of $649 for 16GB and $749 for 32GB. Availability is said to be “this year”.

The biggest question about the N9 is the role it and Maemo/Harmattan will play in Nokia’s future.  Although there is speculation that the N9 may be Nokia’s last Linux based device, I’m hoping that will not be the case. I’ve come to accept that Symbian has reached the end of it’s usefull life and that Windows Phone, with Nokia enhancements, can become Nokia’s primary smartphone platform going forward. But I think that the world’s largest manufacturer of mobile phones needs to have a flagship phone that is not beholden to someone else’s OS and design decisions.  Hopefully that’s the role that the N9 and its successors will play.

I believe that It’s a misconception that Nokia CEO Steven Elop has stated that the N9 is Nokia’s final MeeGo or Maemo phone. Actually he has refered to MeeGo as Nokia’s platform for future disruption and that a (not necessarily the last) MeeGo phone would be released in 2011. The infamous Feb 11th slide (below) shows that MeeGo will be recieving funding (albeit reduced) even after Symbian is gone. 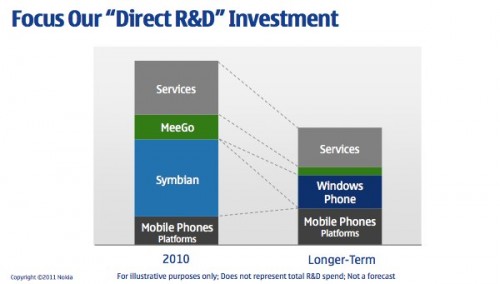 In addition the the N9 a second MeeGo Harmattan device was announced today. It’s the N950 which will be produced in limited quantities and made available to developers as a long term loan. The N950 has the same CPU and RAM as the N9 but sports an aluminum body and slide out QWERTY keyboard. Developers can apply to receive a N950 through the MeeGo Community Device Program or the Nokia Developer Launchpad. The N950 makes a cameo appearnce in the video below from the Nokia Developer Forum.

Via: cnet asia, Engadget, ReadWrite Mobile, My Nokia Blog, The Nokia Blog, Nokia Conversations, Nokia – All it takes Is a Swipe Images courtesy of Nokia.