To my horror the Nokia E6 review unit that WOMWorldNokia sent me seems to have developed a fault and has been spontaneously rebooting every ten minutes or so since yesterday morning.  I really like the phone and hoped to get a few more days use out of it before I have to send it back.  I’ve been successful in the past at fixing misbehaving Symbian phones with a soft or hard reset so I set about trying to reset the phone to see if that would help.

A Google search for “Nokia E6 reset” brought up a lot of confusing and contradictory information. Much of it was clearly wrong with multiple blog posts referring to the E6’s non-existent “camera key”. I decided to experiment a bit and publish a tested guide to all the posible ways to reset the E6. They are listed below in order from the least to most destructive of data. 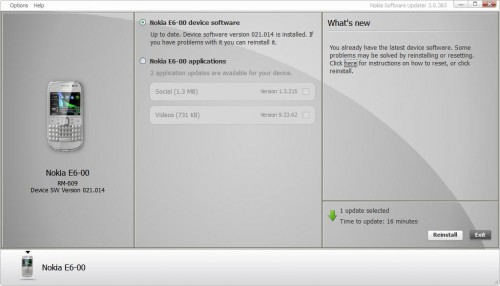 So was I able to fix my E6? Unfortunately not. I restored the OS twice and hard reset several times but even with nothing on the phone other than the pre-installed apps and with no apps running the phone periodically reboots even when sitting idle.

A small percentage of all complex electronic gadgets of all brands do fail, usually due to a single bad component out of the thousands that make up a phone. Fortunately, these failures are most likely to happen within the first few weeks of the devices life when the device is under warranty.

In spite of this particular E6 going south on me I do not hesitate to recommend the phone. It’s a great replacement for an E71, E72 or E73 with a much higher resolution screen and a better camera and keyboard than any of those phones. Plus it has a touch screen which adds a lot of flexibility and ease of use to most apps. I’m a huge fan of Nokia’s E Series QWERTY bar phones like the E72 and think the E6 is the best Symbian phone I’ve ever used and one of my favorite smartphones of all time. Up until it failed the E6 had been totally reliable.

Update: I discovered that if I remove the SIM from the E6 it’s stable again even using WiFi and Bluetooth. But with any SIM (I tried both active and inactive ones from three different operators) inserted it starts crashing again. I suspect there is something wrong with the radio hardware.