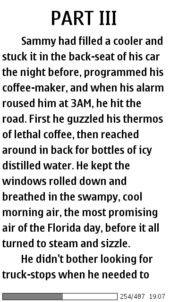 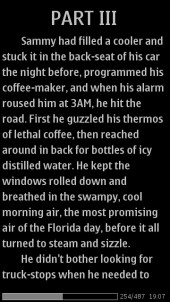 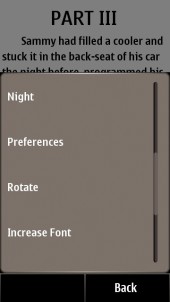 My favorite eBook reader is now available for Symbian 5th Ed. and later and MeeGo/Harmattan.  It’s FBReader, which I started using around 2005 on a Sharp Zaurus Linux PDA.  FBReader is open source software that runs on just about every Linux based portable platform including Android and Maemo as well as on Linux, Mac OS X and Windows PCs.

The Symbian and MeeGo/Harmattan versions are labeled as Betas with the disclaimer that aren’t production quality. A  production release for both platforms is due by the end of 2011.  Although there are some minor annoyances, FBReader for Symbian is already very usable. It supports the ePub and FB2 formats. I tried several books in each format they all worked well including images and proper formatting. FBReader on other platorms supports additional formats including  HTML, Plucker, PalmDoc, zTxt, TCR, CHM, RTF in addition to ePub and FB2, so I imagine those will be added to the Symbian and MeeGo versions eventually.

The FBReader Symbian version’s feature set is similar to that of the Android version.  It can open eBook files from any directory in the file system and has an online library feature that lets you search for and download books from Feedbooks, ManyBooks, Smashwords and other online sources. You can your other network libraries that support the OPDS standard. There’s a full text search function and table of contents support, but no bookmarks or annotations. The Android version supports bookmarks and I expect the Symbian and NeeGo ones will at some point as well. 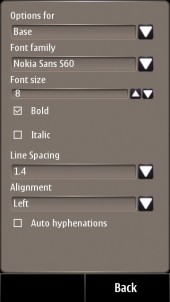 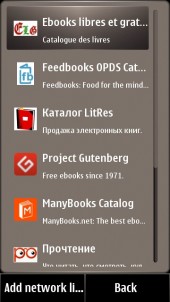 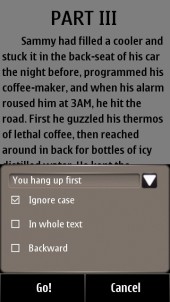 There are plenty of configuration options too. You can change fonts, margins, justification, line spacing, text and,background  colors and the scrolling method (tapping or swiping either the left and right or top and bottom edges or by using the volume rocker).

Although it’s a Beta, and there are some missing features, FBReader seems fast and reliable on the N8. It’s great to finally have a native Symbian book reader that supports online libraries and ePub, the most widely supported open format for eBooks.

The novel show in the screenshots is Cory Doctorow’s “Makers“, published under a Creative Commons license.

4 thoughts on “FBReader Now Available For Symbian and Harmattan”