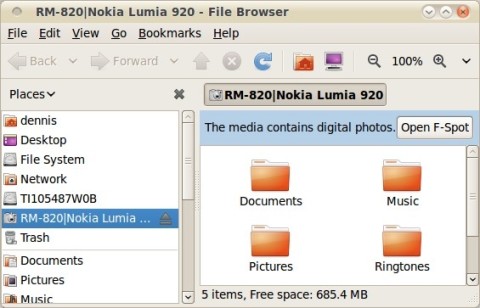 @Nokia_Connects has loaned me a Nokia Lumia 920 to try out. This is the first time I’ve used a Windows Phone device for more than a few minutes. The Lumia runs Windows Phone 8 While there are a few things I don’t like about WP8, I’m enjoying the overall user experience. It’s refreshingly different than anything else and fast, fluid and, for the most part, very intuitive.

As a Linux user I wondered if it would be possible to connect the Lumia with my Ubuntu laptop and transfer photos, music, videos and documents back and forth.

Like Android 3.0 and later, Windows Phone 8 uses MTP (media transfer protocol) rather than USB mass storage for interfacing with a device’s internal Flash storage, and with the SD card if the device uses one (the Lumia doesn’t.)

At one time their were some issues with MTP support in Linux, but they seem to be mostly fixed. At least when when connect my Nexus S phone running Android 4.1 to my PC running the ancient, but still supported, Ubuntu 10.04 LTS, a Nautilus file explorer window pops up showing the phone’s internal “memory card” and I can copy files back and forth between PC and phone. If I drop music files or videos anywhere in the Android phone’s drive, the Android Media player finds and plays them with no issues. So it should “just work” with Windows Phone too, right? Well, yes and no.

When I connected the Lumia to my Ubuntu Linux box with a USB cable, as expected, Linux recognized the Lumia as an MPT storage device and opened a Nautilus window displaying the phone’s pictures, documents, music, ringtones and videos folders (image, above). That looked promising so I tried copying various types of files to and from what seemed like the appropriate folders. The results were mixed.

I was able to find workarounds for all the problem file types: 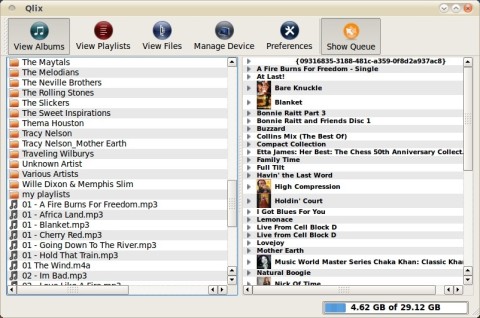 It’s all a bit kludgy, but by using a combination of USB, Bluetooth and Qlix I can move documents, music, photos, videos, and ringtones between my phone and computer. Which is as much as you can do with Microsoft’s Windows Phone app for Windows 7 and 8 and apparently more than you can with a Mac.