The flood of  press releases from MWC has slowed to a trickle as the show winds down. This has given me a chance to catch up with another flood, the one of mobile statistics released at the show over the last three days.

The most interesting numbers come from mobile  advertising network BuzzCity which conducted a survey (PDF) of visitors to the mobile sites of its 2000 publisher partners. The survey was actually conducted ON the mobile web which is pretty cool in itself.  3400 users in 15 countries participated.

The most eyebrow raising data from the BuzzCity report is that 70% of mobile web use occurs at home, compared with11% at work and less than 6%  outdoors or while on public transportation.  I initially found this hard to believe but it actually makes sense partly given BuzzCity’s demographics and the way the survey was conducted but also because it probably is true. 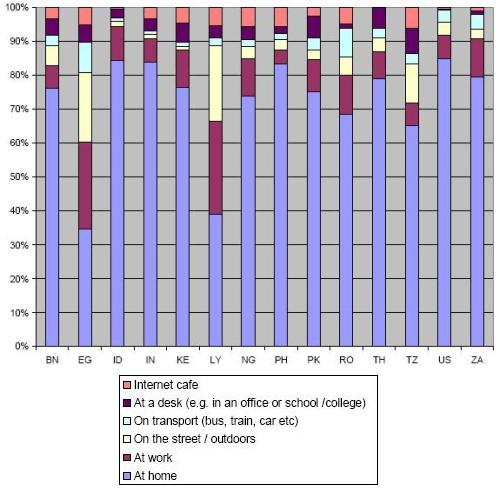 BuzzCity is based in Singapore and its advertising platform primarily targets users in Asia, Africa and the US.  The 15 countries represented in the survey were;  Brunei,  Egypt, Indonesia, India, Kenya, Libya, Nigeria, Philippines, Pakistan, Romania, Thailand, United States and South Africa.  Except for the US, these all emerging economies where PC usage is relative low.  Only 7% of the survey respondents were from the US.

BuzzCity’s core business is actually the mygamma.com mobile social network. The company says mygamma’s core demographic is “the unwired“, which it defines as  “…the newly connected emerging middle class in developing
markets and the blue collar sector in developed regions.”  The BuzzCity study was conducted on publisher sites across the advertising network in addition to on BuzzCity itself. However the incentive for users to participate in the survey was that they received “Gamma Dollars”, mygamma’s virtual currency, as a reward. So I think it’s safe to say that the vast majority of survey participants were mygamma users.

Even if you factor in that over half the US respondents earned less than $2000/month and are thus less likely to have a home PC, it’s obvious that there is a lot of  mobile surfing is going on in homes where there ARE internet connected PCs available. And when you think about it, that’s not surprising.  The mobile is something the user always has with them and it’s always turned on and ready to surf.  I have several PCs to choose from at home and yet I frequently use the web on the phone to do things like check Twitter,  Bloglines, news headlines  and this blog’s comment moderation queue in bed or during the commercial breaks of TV programs.  I almost always check the weather forecast using my phone because it’s faster and easier than with a PC.   As phone screens get bigger, mobile browsers become more capable and easier to use and mobile network speeds increase, we will see more and more web use moving to  mobiles.  If the web experience is good with the device that is always with you why use anything else?

The BuzzCity report is 75 pages long and packed with statistics and charts with the data broken down by country.  It’s fascinating reading for anyone with an interest in the state of mobile browsing particularly in emerging economies.  Here are few highlights:

There’s also a lot of demographic information (gleaned from the participant’s mygamma profiles) included in the study. Most survey respondents are in their 20’s and 60%  have some education beyond secondary school at a  college or trade school. 19% have a university degree.

A lot of folks are worried about the recession’s effect on mobile data usage and growth. The future actually looks pretty bright according to a Nielsen survey commissioned by network services vendor Tellabs. Neilsen asked users in the US and the five largest European counties about  their  planned use  of  mobile data services over the next two years.  Current mobile data users expect to increase their use by 58% in the US and 55% in Europe.  In addition, 27% of European and  28% of US mobile subscribers who do not use mobile data services now intend  to start using them in the next two years. In the US, the service they are most interested in is the mobile internet. In Europe,  it’s  MMS followed by the mobile web.  Here’s a table from the study indicating the services current non-users say they intend to use in the next two years:

When looking at that table keep in mind that we aren’t talking about a 49% overall increase in mobile web use but 49% of  27%. or an additional 13% of mobile users trying the mobile web.  Still good news as another Nielsen study (PDF)  shows that only 15.6% of US mobile subscribers used the mobile web in 2008,  so another 13% of subscribers  would bring mobile web usage up to 28.6%, an 83% increase.

Finally the GSMA, which is the leading mobile operator trade group, gathered data from the UK mobile operators to come up with a mobile web top site list:

The  GSMA analyzed data gathered by UK operators to create a list of the top 10 mobile sites list and compared  that list with another (from Comscore) of the top ten UK PC web sites. The results are hardly surprising, the top mobile destinations are operator portals,  mobile versions of the big names on the full web plus the sites of the top two UK handset vendors. The GSMA’s list does  correlate nicely with the most popular types of sites in the BuzzCity study.  Communication (Facebook, Bebo, Microsoft  (Spaces), Google (Orkut, Reader), Nokia  (Ovi and Mosh), Entertainment (Microsoft, Yahoo, Apple, Sony, AOL) and Information (BBC, Yahoo, Microsoft, AOL).

Incidentally, if you are interested in mobile statistics (and you probably are if you’ve read this far) your really need   to pick up a copy of Tomi Ahonen’s Almanac 2009.  It’s Tomi’s latest eBook,  a compilation of mobile statistics. The almanac is full of hard to find information like:

There’s a lot more too, including:

The  Tomi Ahonen Almanac 2009 is a 215 page DRM-free PDF eBook.  It’s available only from Tomi’s website (tomiahonen.com/ebook/almanac.html)   for 9.99 Euros.