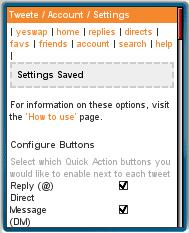 Twitter was down all morning thanks to a stupid DDOS attack. When it came back up my favorite Twitter mobile client, Dabr, didn’t come back up with it.  Dabr’s still down 14 hours latter.  After using the Twitter.com’s extremely limited mobile site for a while I started looking for alternatives.  The first one I tried was Tweete. Not only was it working but Tweete has added a whole bunch of features since I last looked at it in in December. I think it’s my new favorite.

Tweete’s greatest strength has always been it’s support for old, basic feature phones that can’t handle pages much over 20 KB.  The average size of a Tweete timeline page is only 14 KB, about the same as the official mobile site’s pages.  But Tweete has all sorts of features that Twitter’s own mobile client doesn’t like search, the ability to delete your own Tweets  and links that let you reply, favorite, direct message or “Retweet” without having to remember that D=Direct @=Reply, fav=Favorite and  Retweet:= Retweet.

Dabr has all those plus it displays avatars and Twitpics.  Of course displaying those images makes Dabr pages bigger, about 38 KB for the timeline on the average.  I use Opera Mini, which can handle pages up to around 400 KB as my main browser and I like seeing the avatars and pictures so I’ve  settled on Dabr as my main Twitter client. I even use it on the desktop because it’s so fast and does everything I need in a Twitter client. 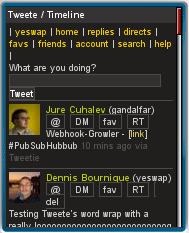 Tweete in it’s default state is svelte as ever but it now has  all sorts of options that basically let you configure it to emulate Dabr.  Click on the “account” link at the top of each Tweete page and choose “Configure General Settings” and you can turn on avatars and Twitpics.  You can also increase the number of Tweets per page from the default of 20 up to as many as 200, turn on auto refresh and add and remove items from the menus. There’s also theme support and several themes to choose from including a rather slick “Dark” one (lower image).  Tweete has profile support now too.  There are two profiles, “mobile” and “desktop“. Each profile can have different settings. The first time you vist Tweete with a new browser you are prompted which profile you would like to use and Tweete remembers your choice for that particular browser.

What makes Tweete my new favorite though is that not only can I configure it to have Dabr’s feature set but it also eliminates the only annoyance I have with Dabr.  When someone puts a long link or some stupid long made up word like Ahhhhhhhhhhhhhhhhhhhhhhhhhhh! into a Tweet, Dabr doesn’t wrap the line making the whole timeline wider than the screen, which means that you have to scroll horizintally to read every single Tweet on that page. It happens surprisingly often and when it does it’s mighty annoying.  I just Tweeted “Testing Tweete’s word wrap with a really loooooooooooooooooooooooooong word” and it worked “loooooooooooooooooooooooooong” wrapped and no horizontal scrolling was required. I love it!

My only reservation about Tweete is it seems a bit slow at times.  Hopefully that’s due to some residual slowness in Twitter itself  due to the DDOS which is apparently still ongoing.

One thought on “I’ve Rediscovered Tweete”