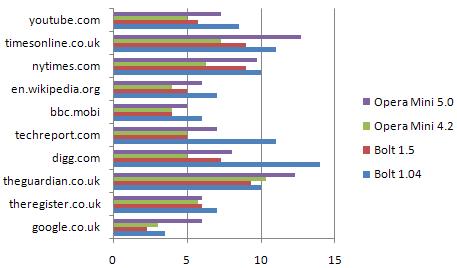 I’ve run some speed tests on the new Opera Mini 5 Beta and Bolt 1.5 browsers.  With the release of Bolt 1.5, Bitstream is claiming a 10-20% speed increase over the previous 1.04 version of Bolt and goes on to say that

“In comprehensive speed testing of a variety of Web pages from different websites, BOLT was routinely 25 to 50 percent faster than the next fastest mobile browser.”

I was interested in seeing if Bolt lived up to this claim.

Opera Mini 5 is an early Beta. It has a completely revamped UI and some exciting new features including tabbed browsing, the ability to copy text from web pages and a password manager. Opera makes no claims of a speed increase in Opera Mini 5 but I thought it would be interesting to see how it compared with Bolt 1.5 and Opera Mini 4.2, which was the fastest on all mobile browsers in my previous tests.

I’m using the same test Web sites and methodology that I used  in August when I compared Opera Mini 4.2, Bolt 1.04, Skyfire 1.0 and UCWEB 6.3. That test was itself based on speed tests of ten mobile browsers by About Symbian’s Rafe Blandford and  Matthew Miller at Smartphones and Cellphones. Each browser was tested using a Nokia N95-3 connected by WiFi to 1.5 Mbps ADSL line. I loaded each site five times in each browser, discarded the best and worst results and averaged the three remaining.

Test were run with each browser using its highest quality image settings.  The Opera Mini browsers were tested in Desktop mode and Bolt was tested in its normal, non-split screen mode.  The Bolt 1.04 numbers are from my August test. Installing Bolt 1.5 overwrote the previous version and I hadn’t saved a copy of 1.04 anywhere. Plus the speed increases in 1.5 are supposed to be mainly due to server enhancements so comparing with the August results gives a good indication of Bolt’s progress over the last two months.  I did retest Opera Mini 4.2 and found it slightly slower overall than in August.  This is probably more the result of changes in the sites tested than any difference in Opera Mini itself.  Here are the numbers:

Bolt definitely lives up to its claims of increased performance with 1.5 being 29% faster than 1.04.  It’s still slower than Opera Mini 4.2 by a slight margin so I wasn’t able to validate Bitstream’s claims of having the fastest mobile browser overall.  Bolt was faster than Opera Mini on two of the ten test sites and tied it on two more so it’s certainly possible that Bolt is the fastest on some set of sites, just not the ones I tested with.

Opera Mini 5 is slower than both 4.2 and Bolt 1.5.  This is actually not surprising as Beta versions of software typically are not fully optimized and may include performance sapping debugging code. I expect Opera mini 5 to get faster with each release. Speed isn’t everything either. Opera mini 5 remains my mobile browser of  choice in spite of being a little slower thanks to its superior feature set.  Tabs and the password manager trump faster page load times for me.