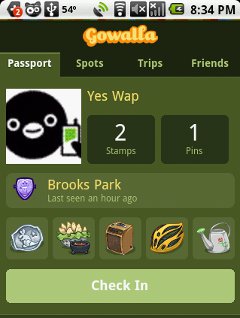 Gowalla is a location based social networking “game” that is very similar to the better known Foursquare. But it’s not a copy or clone. The two services were created independently and both were launched essentially simultaneously at SXSW last year.

Gowalla players compete for “Pins”, the equivalent or Foursquare’s badges, by checking in at physical locations around their neighborhood, city and the world. Gowalla has always allowed checkins anywhere, unlike Foursquare which was restricted to 100 major cities until recently. Gowalla players can check in using an iPhone app, a desktop website and a mobile site at m.gowalla.com.

Unlike, Foursquare’s barebones mobile site which appears to have been designed for basic feature phones and is not location aware, Gowalla’s is an attractive “touch web” site that can retrieve your current location from the browser on Android and possibly other platforms.

Gowalla only recommends their web app for Android and it does look great and work perfectly with my HTC Magic Android phone. However the greatest advantage of web apps is that they can be cross platform so I was hoping that at least a subset of Gowalla’s features would be available on other devices.

Sadly I found that Gowalla’s mobile site was not usable on any of  the other mobile devices I tried. On phones without location support in the browser Gowalla didn’t even load, hanging with the message “locating” displayed. With the advanced location aware Mozilla based browser on the Nokia N900, Gowalla loaded and I was able to login. Gowalla got as far as finding my location on the N900, but when I tried to check in a got an endless barrage of JavaScript error alerts that made it impossible to continue.

To achieve viral growth Gowalla needs to support more browsers.  Between them the iPhone and Android account for no more than 20% of the mobile market. It looks like Gowalla realizes this and recently released an API and announced that BlackBerry support is coming soon to the webapp and that a native BlackBerry web app is in the works as well.