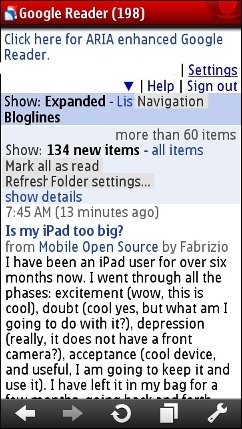 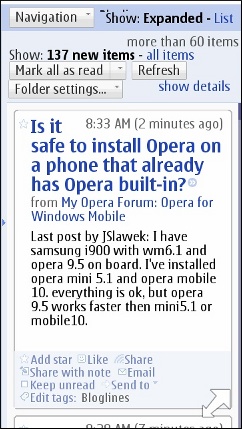 In this age of Twitter I’m finding I use RSS a lot less than I used to. Most of the bloggers and sites I used to read in my RSS reader are active on Twitter and they always Tweet a link to their latest post. But I still use RSS, particularly to follow web forums and mailing lists. People who post to forums and lists don’t usually tweet about it,  but many forums including the My Opera Forums and Forum Nokia as well as mailing lists that use Google and Yahoo groups have feeds.

For me at least, the combination of Opera Mini and the mobile version of Bloglines was by far the best way to consume RSS feeds on a mobile phone. The great thing about Bloglines was its option to read the full text of all your unread items as a single scrolling page “River of News” style.

I know that doesn’t sound very mobile friendly and it isn’t in the legacy sense of 20 KB WAP pages. But Opera Mini is capable of loading huge pages very quickly even with a really slow connection on a basic feature phone. All the other mobile readers I have seen display a list of unread items and force you to click through to each one and then click back to the list to retrieve the next item. As far as I’m concerned that’s two unwanted clicks, an unnecessary page load and at least 10  wasted seconds for each item.

Bloglines, which has been dying a slow death ever since IAC acquired it in 2005, is shutting down on Oct 31. That leaves Google Reader as the only remaining Web based RSS reader that I’m aware of that has a mobile version. As I’ve ranted about before, Reader’s mobile and “iPhone” versions both have a particularly inefficient click each item and wait interface. And the desktop version of Reader doesn’t seem to work at all in any mobile browser where I’ve tried it.

I was really dreading the Bloglines shutdown, but then I discovered a version of Google Reader for the Nintendo Wii. It’s not perfect but it does let you view all your unread feed items as a single scrolling page just like Bloglines. I’ve really only used this extensively in Opera Mini (image top left) but it seems like it’s also usable with the UC browser and with the surprisingly good Symbian browser on the new N8 where it looks particularly nice (image top right).

There’s some initial setup you need to do the first time you use Reader’s Wii version in Opera Mini.

When using the Wii version in Opera Mini items are not automatically marked as read as you scroll through them. You have to scroll to the top of the page and click the “Mark all as Read” link. Scrolling through items does seem to mark them as read in the N8 Symbian browser.

I tried the Wii version in a bunch of other mobile browsers with mixed results. Besides Opera Mini and the N8 native browser, the Wii version works well with the UC Browser in its “adaptive” fit-to-width mode. It also works in the Android browser on an old HTC Magic running Android 1.6 but text does not re-flow when zooming. When zoomed to screen width, text is readable in landscape orientation but too small for my old eyes in portrait.

Browsers where the Wii version doesn’t work well enough to be usable include:

I’d be interested in hearing what happens in other browsers especially the new BlackBerry Webkit based browser and the iPhone and Palm WebOS browsers. It you try the Wii version in another browser, please leave a comment letting us know.