There was quite a bit of furor on the interwebs back in January when Google  killed the special version of the iGoogle personalized home page for the iPhone and Android devices. Google’s explanation at the time was that they wanted to provide a consistent experience across all devices. Which didn’t make much sense given the big Gs enthusiasm for cloud based web services running in advanced mobile web browsers as a replacement for installable apps. For the last five months iPhone and Android users navigating to iGoogle.com saw the generic mobile version of iGoogle, a bare bones implementation that has the virtue of running on your old RAZR, but which unfortunately gave iPhone or G1 users an old RAZR like user experience. 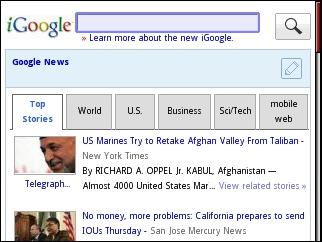 It turns out the Google was just kidding about giving all mobile users a consistent, albeit lowest common denominator, user experience. The new iGoogle for Android and the iPhone was announced yesterday. It’s a worthy replacement for the old iPhone/Android specific iGoogle with support for all desktop iGoogle widgets except those that are Flash based. Each widget appears as a large button initially, which when tapped expands to reveal its content. The new iGoogle is not the default, it’s offered as a “Try the new Mobile iGoogle!” option to iPhone and Android users (only) visiting iGoogle.com.

There are a lot of powerful JavaScript capable browsers on devices other than the iPhone and Android that could possibly handle this richer iGoogle Mobile. I tried impersonating a bunch of mobile browsers including Opera Mobile 9.7, Skyfire, Bolt, the Symbian WebKit based browser and even the Palm Pre browser using the Firefox User Agent Switcher and then opening google.com/m/ig?uipref=6 which is what igoogle.com redirects to with the Android browser. Google wasn’t having any of that, serving the old one size fits all WAP version to all of the alternate mobile user agents. I can see Google not wanting to deal with people complaining about bugs on untested browsers but could we at least have a direct link to the new version with a disclaimer warning that it might for work?

4 thoughts on “iGoogle For the iPhone and Android. It’s Baack!”