I attended MobileCamp San Francisco (mobile site) yesterday. What a great event, it was a BarCamp – a user driven un-conference with no spectators, where everyone is a participant. Although BarCamps are user generated events it takes the efforts of dedicated volunteers to pull off an event like this. Thanks Indira, Ritwik, Andy and Alexi, I know you worked your butts off to make MobileCampSF the success it was. Thanks also to Nokia, whose sponsorship provided great food and a perfect venue in the beautiful and architecturally significant Swedish American Hall. It was great to finally meet Mike and David and so many of my readers. I attended and participated in as many sessions as I could and here are my impressions. 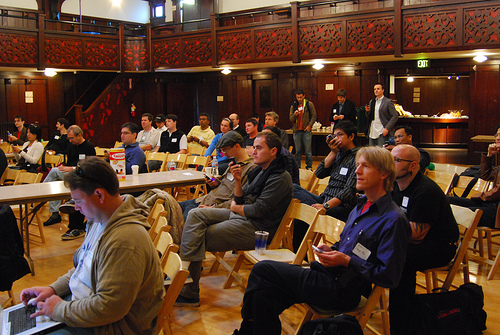 First was PlayMegaphone.com‘s, Dan Albritton. Megaphone has a really cool series of products built around the unique concept of controlling digital signage with mobile phones using voice and/or keypad. They have a deal with MTV to use the huge MTV video screen in New York City’s Times Square to present multi-player games that passersby are encouraged to participate in, by using their phones. We played two games at MobileCamp. The first was Shoot’em where you steer your phone around the big screen zapping other players. The game was a lot of fun and after Dan gave the winner of the first round her choice of a Nokia N95 or N800, everyone wanted to play. The other game Noisy, Noisy Hippos was even better. You’re are a hippopotamus and grab objects flying across the screen above you by yelling “Grab!” into your phone. It must have been hilarious to watch a roomful of techies yelling “grab, grab, grab…” although I was too busy trying to win an N95 to really notice. About 10 devices were given away to winners. I didn’t win anything but came close, oh well. MegaPhone seems to be doing really well with their idea. They have done games for various sponsors all around the world on big screens. The concept scales down to smaller screens in stores and bars. They did games at the Palm Cento promotion and Dan showed a clip of Palm CEO Ed Colligan enthusiastically playing. Dan sees the product as an alternative to SMS campaigns which he categorized as “Do something boring and we will SPAM you.” Instead Megaphone offers fun with game winners getting their prizes by SMS or a voice message. The server runs on a laptop and supports 30 users and scales to thousands of users with multiple servers using Amazon’s EC2 rent by the hour servers.

Next I participated in a small group led by Nelz, brainstorming mobile security and privacy issues. Combining social networking with mobile technology that follows us everywhere we go and has the ability to report our location with an accuracy of 50 meters raises huge privacy issues. How can we use the technology without subjecting ourselves to surveillance by government, employers, credit bureaus and individual stalkers? We generally agreed that mobile users do not currently have a good way of knowing what information will be shared and with whom. We came up with ideas including: campaigns to educate users of the danger of revealing personal information including mobile phone numbers to third parties and encouraging users to demand that information not be shared without explicit opt-in. We also came up  ideas for new business models based on enhancing user security like anonymising mobile proxies, disposable phone and SMS numbers, and granting a “Seal of Good Privacy” to vendors that meet certain criteria for protecting user identifiable identification.

Bebo is a 1.5 years old web based social network and member of OpenSocial, that claims to be the 3rd largest social network internationally. Last month Bebo launched a mobile version on Orange UK which includes a special 3 pound/month unlimited text and web bundle for Bebo users. Bebo will be launching off-portal on all networks by year end.

I caught the tail end of Alexis Rondeau’s (Semapedia) presentation on QR codes. Alexis mentioned the importance of open standards and pointed out that QR and Datamatrix, the two open formats for 2d codes, have another advantage beyond being open and royalty free compared with proprietary codes like Shotcode. QR and Datamatrix encode a URL which the readers pass directly to the browser. The proprietary codes take the user to the vendor’s site for a lookup or billing before redirecting to the final destination, which has a performance impact and privacy implications. As he ended the presentation, Alex bemoaned the lack of phones with bundled 2D code readers especially in the US. He mentioned that Nokia was now bundling a reader with several phones. Then he asked participant’s who hadn’t won a phone or tablet to raise their hands and handed each of them a new N95. So I got my phone, although I felt I kind of cheated as I only participated in part of the session. I’ll be posting more about the phone after I’ve explored it some more starting with the QR code reader.

Mike Rowehl lead an exploration of Maemo, the OS running on the Nokia N770 and N800 tablets. We all got to play with a couple of prototypes of the next model, the N810, which is smaller than it’s predecessors but keeps the same great 800 x 480 4.1″ screen. It features a slide out QWERTY keyboard and GPS. I could definitely see using one of these to blog on the road. Nokia has promised to release 5 revisions of the Nxxx tablets and of Maemo so the N810 is the third in the series. Interestingly the browser on the N810 is a “lite” version of Mozilla that is NOT Minimo. Maemo is completely Open Source OS including the kernel, X windows server and window manager. The C++ and Java development environment runs on a Linux desktop but Mike codes mostly in Python right on the device. There are already 400-500 Maemo applications. The big hope in the Maemo communitiy is that Nokia will release a Maemo phone. Already Maemo has been ported to FIC’s Neo, the OpenMoko phone. Alexis tried to give away N800’s at this session but everyone present had already won either an N95 or N800 so he moved on to one of the other sessions to visit Nokia’s largess on some folks.

The final session I attended was my favorite and certainly the liveliest. Dave Harper and Nigel Choi did a very polished and fascinating presentation on how Vodafone and Novarra are causing serious grief for mobile developers, off-port vendors of downloadable content and users. The issue, which I’ve blogged about before, is that Voda has made all web access pass through Novarra’s transcoder by default. The transcoder replaces the mobile browser’s User Agent header with a generic desktop User Agent making it impossible to tell one phone from another. Sites that do browser detection to deliver targeted mobile or desktop content are fooled into sending the desktop version to the transcoder. Novarra does a programatic reformatting to create a bowdlerized mobile site. Although Novarra claims that the result is a better user experience, Nigel showed a series of slides demonstrating how the transcoder completely breaks the Wall Street Journal’s site. Instead of the WSJ’s well designed mobile site with full access to articles, Novarra delivers a site that forces users to scroll through 5 pages of irrelevant sidebars and headers before they reach the story. But it gets worse, the desktop WSJ site requires a subscription and users, after scrolling down 5 screens, are told to login “at the top of the page” which of course is 5 screens back. You can see Nigel’s presentation here. 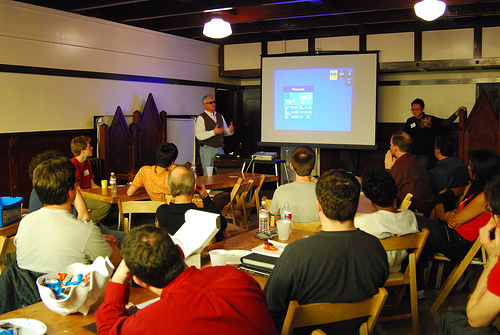 Novarra, in addition to claiming that their transcoded sites are better than purpose built mobile sites, has come up with some numbers to the effect that since enabling the transcoder Vodafone’s content sales on it’s portal are up. This makes sense. If the transcoder breaks off-portal web sites and content downloads, users have no choice but to use the Voda portal. Very sneaky. Vodafone has extended transcoding to Ireland, Spain and Italy using various other services in addition to Novarra. Voodafone UK offers a whitelist where content providers can request that their site not be transcoded. There is no common whitelist for all Vodafone national operators, content providers to apply separately to each Vodafone division. Developers are fighting back but there’s a sense of powerlessness against the might of a giant corporation. Giving up is not an option. Some of the actions that have been started and need support:

Some brainstorming lead to the idea of seeing if the transcoder can be detected from it’s headers. Sites could then but up a message saying the content had been degraded and urging users to complain to Vodafone. Interesting idea, I wish I could sniff those headers but that’s not possible from this side of the pond.

MobileCamp is coming to New York City this Saturday, November 10. It looks like it’s full, but there’s a waitlist. If you live near New York, give it a shot.