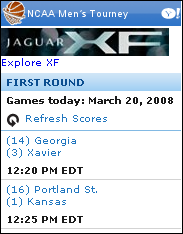 That’s the annual NCAA College Basketball Championships on your mobile. Popularly known as March Madness, the two tournaments (one for men’s teams the other for the women) each pit the top 65 US college teams in a 3 week long single elimination tournament. March Madness is easily the most popular college sports event in the country. I think its appeal is due to the large number of teams, increasing the likelihood of your alma mater participating, and for gamblers the lure of so many chances to win or loose in a short period of time. It also helps that each successive round cuts the pool in half with the later rounds having the memorable alliterative names like “Sweet 16”, “Elite 8” and “Final 4”.

Anyhow, it truly is March madness to the players, coaches and fans. Many of the games happen during working hours posing a problem for fans whose employers block sports sites at work or for other reasons can’t send hours a day clued to the TV. The mobile web offers an alternative way to follow the March Madness action where ever you are.

Yahoo has a launched a dedicated March Madness site at yahoo.netbiscuits.com/ncaa (image above) Based on that domain name it looks like Yahoo has outsourced the site design to Netbiscuits.com. The look and feel of the site though is very similar to Yahoo’s new Widget enabled mobile portal beta (review), it has a little of that iPhone thing with gradient blue section dividers and an Apple-esque looking refresh button. Besides live play by play game coverage and the latest scores, Yahoo’s NCAA site has multiple feature articles about almost every team in the tournament, loads of photos and the game schedules for the next few days. Nice site. 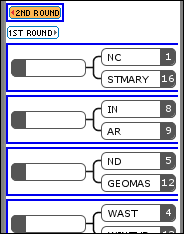 Yahoo’s not the only choice for your March Madness Mobile needs. ATT has teamed up with CBS Sports and mLogic to create a March Madness portal at att.ncaa.mlogic.mobi. Besides scores and tournament news this site features a trivia game and also has a neat graphic presentation of the bracket parings (second image) . Although created for ATT, the site is on a public URL so anyone can use it regardless of carrier. ATT Mobile customers can also sign up for text alerts and buy school fight song ringtones and March madness wallpapers.

MSN Mobile has a dedicated March Madness page at sports.mobile.msn.com/en-us/NCAABK with live play by play from Fox Sports along with statistics, scores, schedules and photos.

MSNBC doesn’t have a dedicated March Madness Page but their mobile college basketball page (msnbc.msn.com/id/3152981) is almost all March Madness these days and includes scores, feature articles, game recaps and some of the best sports photography on the mobile web. 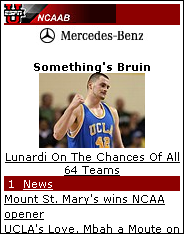 Mobile Sports powerhouse ESPN also has plenty of coverage of the tournament including play by play coverage, scores, schedules and news on their college basketball page at mobileapp.espn.go.com/ncb/mp/redesign (image below). ESPN also lists the point spreads for upcoming games for the benefit of gamblers and has a Tournament Challenge contest with cash prizes for picking the most wins.

I’ve up a page on the YesWap mobile portal with links to these sites, and I’ll add any others that I find. Just go to yeswap.com, click Sports and then March Madness.

If you know of a site that has great mobile March Madness coverage please leave the URL in a comment so I can add it toYesWap. I’m especially interested in finding sites with mobile streaming video or ones covering the women’s championship.