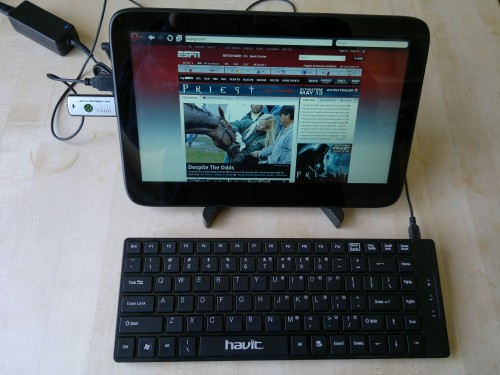 Intel was giving away ExoPC MeeGo tablets to interested developers at AppNation last week and they were nice enough to give me one. I’ve been playing with it off and on for the last week and wanted to share my impressions as someone who is just getting started with MeeGo.

Disclaimer: I’m not a MeeGo developer or Linux Guru. I have done a bit of Web and Wintel app development.  My only Linux experience is using Ubuntu as my main OS for Web development for the last year.  This is going to be a Linux and MeeGo newbie’s brain dump of what I’ve  tried and figured out about the tablet and MeeGo.

This is not a product review either. Intel honestly calls the the Tablet release of MeeGo “pre-Alpha” so I’m not going to discuss the many bugs, missing features or usability issues except where necessary to work around bugs to get things done. In it’s current state the MeeGo tablet build is mainly for developers and is not yet consumer friendly.

The ExoPC’s size, weight and battery life all suffer because of the use of the relatively power hungry netbook processor.  Lighter, more power efficient tablets running Intel’s next generation Oak Trail processor are supposed to be available starting this month. Oak Trail is supposed to cut power consumption in half compared with Pine Trail.

The first thing you want to do an ExoPC MeeGo tablet is the upgrade to a newer version of the OS. The MeeGo image on the tablet I received is from February, 2011 and is quite unstable. The latest release doesn’t look different but it doesn’t crash and freeze all the time, the touch interface is more responsive and many things including Bluetooth and auto-mounting USB drives are fixed.

How to update the Meego OS

Restart the tablet and take a look around the MeeGo Tablet UI (images below).  Tap Settings > WiFi and configure your access point, try the browser, notes, calendar and Email apps. The Home button brings up a task switcher/manager which lets switch between and close (with a long press) running apps.

Although the current release of the MeeGo Tablet OS is stable in the sense that it rarely crashes or locks up, it’s prone to intermittent GUI glitches like the inability to enter text and where tapping a menu pad brings up a thumbnail of the current screen instead of a menu. In most cases the only way to recover seems to be a reboot. 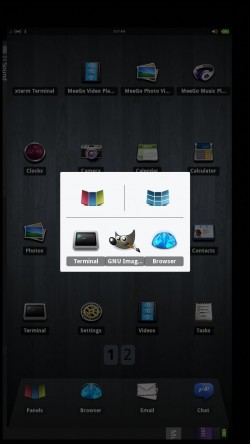 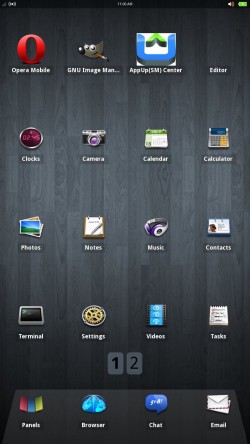 At this point you are probably ready to install some more apps.  Meego uses the Zypper package manager which is a command line utility, so tap the Terminal icon to launch Xterm.

Unfortunately, the touch keyboard doesn’t yet work in the terminal app.  To install apps you must plug in  a USB keyboard.

Gimp and Gedit should now show up in the GUI launcher. Gedit is missing its icon and you have to use the main window (no toolbox) in Gimp but both work reasonably well except when the MeeGo menu as thumbnail bug strikes..  Sometimes the screen starts flashing in both apps but tapping on the menu bar seems to fix that.

The Meego AppUp app store and Opera Mobile 11 are MeeGo specific apps that aren’t in the repository. They can be downloaded from the web and installed with the RPM package manager which is included with MeeGo.

AppUp for MeeGo isn’t really live yet and as indicated on the download page the client is provided mainly for developers who want to test deploying their apps. I tried downloading several apps but they all failed to install. If I figure out how to get installs to work, I’ll update this post with the magic.

Go back to the MeeGo browser and download Opera Mobile 11 from: http://labs.opera.com/news/2011/03/22/. Use the MeeGo WeTab version (the generic MeeGo one installs but doesn’t appear in the launcher).

Back in the shell, install Opera with: 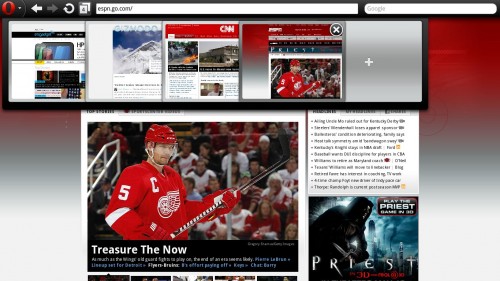 I’ve got a lot more exploring to do with the ExoPC, including finding more  working GUI apps, especially a file manager and editor or word processor with spell check, getting Flash working and trying alternate OSs like the WeTab, handset and netbook MeeGo variants, Android and Ubuntu. I know Windows 7 works too but that’s not very interesting to me so I probably won’t bother.

Check back in a week or so for more ExoPC and MeeGo HowTos.

One thought on “Getting Started with MeeGo Tablet – Upgrading The OS And Installing Apps.”