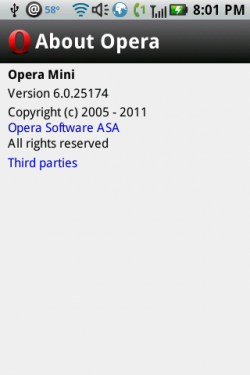 Opera Software pushed out “Opera Mini Version 6.0, Update 3” for Android phones and tablets today. The full version number is 6.0.25174 and it seems to be strickly a  bug fix release. According to Opera the changes are

I tried Update 3 on my two rather low end and old Android phones, a Motorola i1 and and an HTC Magic and I didn’t notice any differences, it worked very well as usual.  But then I haven’t had any real issues with Opera Mini 6 on either phone.  But if you’ve been plaqued by connnection, memory or stability issues with Opera Mini on  your Android device, hopefully this update will help. It’s available now in the Android Market for all Android 1.5 and later devices.