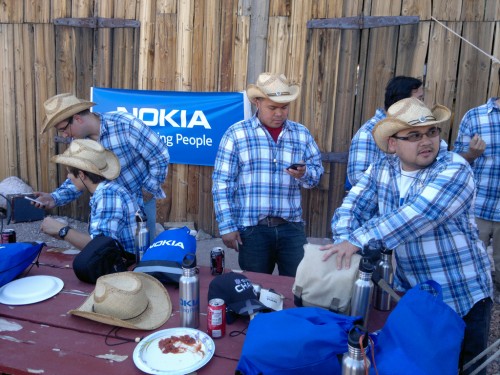 This past weekend Nokia invited me and 19 other mobile bloggers to Las Vegas for a mysterious event. The invite was a bit vague saying, “We’ll be putting the latest, currently available, Nokia devices to the test in the wild west, (also known as Las Vegas) and we want you to join us!” so I didn’t really know what to expect.  “Currently available” devices indicated to me that we wouldn’t be seeing anything new. But I had hopes that maybe the event would mark the release of the “Anna” firmware for the N8 and E7.

The “Ranch” turned up to be a huge resort hotel with a large outdoor pool and cabana area, many restaurants and because this is Nevada, a huge casino.  My room was quiet, spacious and comfortable. I found the staff friendly and helpful, however Donna’s prized leather jacket was stolen from her room so security seems to be an issue.

Being mobile bloggers,  we talked mostly about phones and we had plenty of them to compare. Nokia brought a bunch of N8s and C7 Astounds along with an HTC HD7 Windows Phone and a Samsung  Galaxy S 4G running Android.  The Nokia’s were available for anyone who wanted to borrow one for two weeks or just for the weekend.The bloggers brought a wide assortment of Android, Rim, Nokia and Apple phones.  I’d trialed an Astound at CTIA so I stuck with my N8.

After an afternoon of sipping cool drinks at the poolside bar we were bused over to the Vegas strip for dinner at the PBR Rock Bar and Cafe in the Planet Hollywood hotel/casino. The PBR was a curious mashup of rodeo, sports bar, rock n’ roll and Vegas themes. Dinner portions were outlandishly huge and I don’t think anyone managed to clean their plates. After dinner we discovered the PBR’s mechanical bull. Lenny (@THE_TRUTH34) and Kevin (@nokiaknowings) gave it a try (videos below). The rest of us were too full or too chicken to try.

This next morning, fueled by the hotel’s breakfast buffet, we traveled 45 miles into the desert to the historic Techatticup Mining Camp near Nelson, Nevada which was the setting for the main event dubbed #NokiaUnfenced.  At the camp we were oufitted with cowboy hats and shirts. Each shirt was personally monogram with our Twitter handles. We were split up into groups of 10. The group I was in donned helmets and goggles for a stint of ATV riding (a first for me) in the rugged and desolate mountains. The other group headed to nearby Cowboy Trail Rides where they mounted horses and took to the same hills.

The ATV riding was a lot of fun. Loud, dusty, bouncy fun. We charged up and down switchbacks through lonely cactus and rock studded but very beautiful countryside. Everyone in my group made the ride without incident but in the second group of riders Eduardo (@mobile_ed) lost control of his ATV and had to jump to safety as the vehicicle went down a steep embankment.  The ATV suffered a broken headlight, Eduardo was unhurt but lost his fine Tissot wristwatch somewhere in the desert.

Horseback riding was a slower paced adventure giving me a chance to soak up the countryside’s beauty. The rides were lead by ‘Big Jim’ Sage who worked for many years as a cowboy herding cattle in the area. The trails were narrow and tricky. In the other group Jeb’s(@jebbrilliant) horse stumbled on steep side hill trail and Jeb went flying, landing on the ground. Jeb was stiff and sore and suffered a cut pinkie finger but was otherwise unharmed. 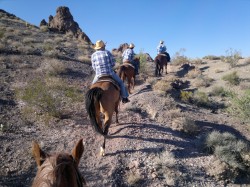 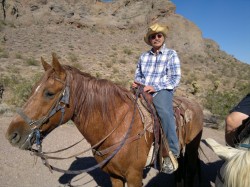 Next up was a bit of a history. We sat in the 19th Century general store as one of the owners told us about the area and ranch’s history which includes claim jumping, numerous murders, gastly mining accidents and a serial killer. Most of the stories centered around the 1861 Techatticup mine on the property which was once the richest and largest gold mine in Nevada.  More recently the mine and store played a prominent role in several movies, including Breakdown and 3000 Miles to Graceland. The history lesson was followed by a tour of the mine where we walked through about a quarter mile of tunnels which were refreshing cool compared to the blazing dessert outside.  Inside the mine we visited the sites of a several horrific mining accidents and peered 600 feet deep into the bowels of the mine, which also stretched 600 feet above our head.  At one point our guide turned out the lights in the tunel and lit a single candle which was all that the miners had for light in the1880s.

Next up we helped Adam from WOMWorld “test” some phones. He wanted do a sequel to the stunt that Tom and I pulled at CTIA where an Astound survived after we ran it over with a bus. To top that Adam tried dropping an Astound, the HTC HD7 Windows  phone and the Samsung Galaxy S 4G Android device from a tall rock to the gravelly ground about 15 feet below.  The Samsung’s cover and battery flew off but once re-assembled it and other phones all worked perfectly. Adam repeated the test from the upper level of one of the ranch buildings, a drop of about 25 feet.  Again all the phones survived.

Adam had been dropping the phones with the screen side up. For a final test he again dropped them from 25 feet but this time they were screen down. Only one phone survived and it wasn’t the Nokia!  The HTC’s screen was shattered.  The Astound looked OK and the display still worked but the phone locked up when you tried to use it and careful examination revealed a long crack on the inside of the screen. The winner of this highly un-scientific test was the Samsung which had a few gouges in the back cover but seemed to be in perfect working condition.

I have to say that I was thoroughly impressed by how well all three phones held up to this torture test.  Who would have thought that a modern smartphone with its large glass screen could possibly survive a 15 foot drop, let alone a 25 foot one!

The evening wrapped up under the stars with a delicious cowboy cooked dinner and sitting around a campfire singing songs accompanied by George Kelly’s (@allaboutgeorge) great guitar playing.

On Sunday we had a farewell breakfast together and those of us with late flights had a chance to explore that ultimate temple to tackiness, the Las Vega Strip.

Thanks Nokia and WOMWorld for a wonderful weekend of fun and the chance to hang out and talk shop with such a great bunch of mobile-obsessed folks. Although Anna was nowhere to be seen I think I felt her presence in Vegas. Or was that Elvis?