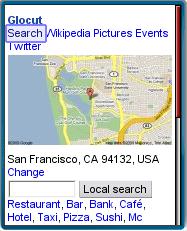 Glocut is one of the nicest local search web apps I’ve seen yet. What sets it apart from all the others is its deceptively simple but effective user interface.

When you launch Glocut the first time you will need to enter your location. It’s not very fussy about  formatting; a full street address, city, country, postal code or a landmark like “Times Square”; they all work .

It gets even better, Glocut has a tiny Java or Windows Mobile native app that you can download. All the app does is retrieve your location from the phone’s GPS and launch the browser passing the Glocut URL with your latitude and longitude embedded in the query string. After launching the browser the app terminates freeing what little resources it was using. What a great way to GPS enable a web app. It works perfectly on my unbranded Nokia N95-3 and should work on any GPS equipped phone that supports the Java ME Location API and allows an unsigned application access to location data.

Once Glocut knows were you are it displays your location on a map and and initially shows Google Local search results for nearby hotels. Not looking for a hotel? You can enter a search query or click on links for predefined searches like  Restaurant, Bar, Bank, Café, Taxi, Pizza, Sushi or  McDonalds. Click on one of those and Glocut displays results centered on your location from the selected category. Glocut’s truly a global application. It seems to recognize address anywhere in the world and the interface is available in 17 languages.

Glocut is more than just a better Google Local front end. There’s a top menu that lets you choose from (Local) Search, Wikipedia, Pictures from panoramio.com, Events from last.fm and Twitter (Tweets from people near you).The Twitter tab even lets you update your Twitter status and when you do it sets your location in Twitter

Glocut’s really very slick and intuitive with short click paths and fast page loads.  I’m really impressed with how easy it is to use, it ‘just works’ which is the best that can be said for any service. OK, it’s not perfect.  There are a few details that need a little work; the Panoramio and Wikipedia results link to full-web rather than mobile pages and there is no privacy policy that I could find, which might make people a little wary of sharing their location.

I had an email conversation with Glocut’s developer who agreed on the need for a EULA and that the Panoramio and Wikipedia results need to be transcoded or point to a mobile version in the case of Wikipedia.  A fix for the non-mobile links and a privacy policy will be in place soon along with some other enhancements including local news, weather, YouTube clips and Flickr images.

Even with its few warts, Glocut is pretty amazing. If Google had built this everyone would be going nuts over how great it was and how Google really understands mobile.  But Glocut wasn’t built by Google, although it uses some Google APIs for maps and local searches.  Glocut was created single-handily by Anders Johnard, a Swedish consultant and veteran of social networking site LunarStorm where he was responsible for their mobile site. Glocut is self funded although Anders indicated he might be interested in some VC funding eventually.    Source: Oh! Mobile Directory