The big Nokia World annual conference wrapped up today in London. There were a lot of great announcements; for developers there’s a new Qt SDK for Symbian and S40 and  code signing is now free for Java and native apps There are new versions of Ovi Maps and the Ovi Store for Symbian^3 phones. The Ovi Store now has in-app puchasing.  On the hardware side, six bluetooth headsets, a charging plate, a new Touch and Type S40 phone and three new Symbian^3 phones were announced,  The new Symbian phones; the C6-01, C7 and E7, look very promising. All feature capacitive touchscreens and 256MB of RAM. They pretty much blanket the smartphone price range at  €260 ($339), €335 ($430) and €495 ($650) respectively.

However, I’m rather surprised that almost nothing was said at Nokia World about MeeGo, which Nokia has touted as their OS of choice for future “flagship” models.  Nokia EVP Niklas Savander, was quoted by the Guardian as saying, “We will have more to say about MeeGo later this year. We want to focus on these [new phones] and we want to be ready with everything when we do show off MeeGo.” I’m hoping that means  a significant announcement at the MeeGo Conference that will be held in Dublin Nov 15-17.

There actually was a bit  MeeGo action yesterday but it wasn’t at Nokia World. Intel is holding their big IDF annual developer event in San Francisco this week and yesterday there was a MeeGo Developer Day which I attended.

What I heard is that there is actually a lot of  progress being made on MeeGo. The project is committed to putting out a new release every six months.  The next, MeeGo 1.1, is due October 30. This is promised to be the first version of MeeGo that is fully functional on handsets.  The current release of MeeGo 1.0, while it runs well on Netbooks, is incomplete and not really usable on phones.

The MeeGo development toolchain was demonstrated at the Developer Day.  It’s currently works on Linux. It’s also possible to run the SDK in a Linux virtual machine on Windows. Full Windows and Mac OS toolsets are  in development. Several presenters showed off the MeeGo SDK and Qt Creator running in MeeGo OS on a netbook.  It seemed quite snappy and usable in that environment. Qt is the preferred MeeGo development environment but C or C++ can also be used.

MeeGo is a full implementation of Linux with X-Windows. It uses the RPM package Manager so it should be possible to install and develop against other language run-times including Java or Python as well as run popular Linux desktop apps like Open Office or Gimp. 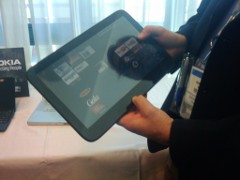 Documentation and MeeGo Linux SDK downloads are here. Instructions for setting up a VM for development on a Windows box are here. MeeGo community discussion, developer and user support are handled by a forum, IRC channel and a number of mailing lists.

At the event’s product showcase I saw  plenty of Netbooks running MeeGo.  There was also a 11.6″ tablet called the WeTab (image, right) that is releasing next week in Germay at a price of €449 ($585) for a WiFi only model and €569 ($740)  for a 3G one.  As MeeGo doesn’t actually have a tablet UI available yet (it’s due next year) the WePad’s developers implemented their own in Qt. The tablet uses an Atom processor and in the very limited hands on time I got with it the UI seemed very responsive. No MeeGo handsets were demoed at yesterday’s event.

On the handset side MeeGo can run on either ARM or Intel CPUs.  Nokia will be using ARM. Several unspecified OEMs are said to be developing handsets using the low power Moorestown version of the Atom CPU.  I asked an Intel representative about the battery life of a Moorestown handsets and was told that it was quite acceptable.

For development purposes their is an Atom handset emulator in the SDK. The ARM build of MeeGo can run on the Nokia N900 and  a limited production (and very expensive) Atom handset reference design  is available from Aavamobile.

There are clearly too many smartphone OSs at the moment.  Not all will survive but I certainly hope MeeGo does.  It’s the most open of all the current smartphone platforms with the entire OS available as open source.  As a Linux desktop user, the idea of  running a full blown desktop OS with shell access and support for standard app packages on a pocket size device is very exciting.

Of course the commercial success for MeeGo depends on a lot more than geek creed.  MeeGo will need good performance, beautiful interface design, intuitive usability and strong marketing to succeed as a smartphone OS against iOS and Android. Based on early mockups the UI (images below) looks great. But looks aren’t enough if performance and usability are sub-par.  In any case, I’m looking forward to the 1.1 MeeGo handset release. 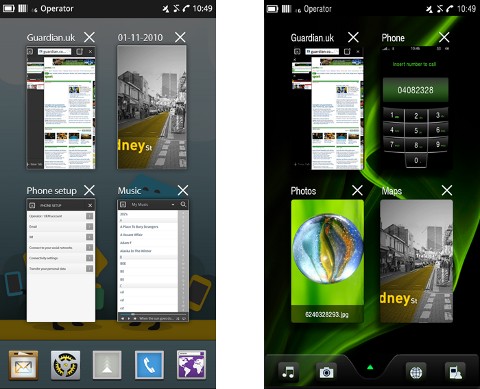 What of MeeGo on other platforms? As a netbook OS I feel it’s just another of the  many Netbook specific Linux distros that are available.  It looks nice and I intend to give it a try.  But for most users netbooks are a Windows thing and I don’t see MeeGo changing that.

Tablets, along with smartphones, are where I see MeeGo having it’s greatest potential.  The iPad’s runaway success leaves PC and device OEMs scrambling to come up with tablets of their own.  Google doesn’t consider Android ready for tablets yet and Chrome OS is nowhere to be seen.  That leaves a real opportunity for Meego to come to market with a slick tablet specific UI combined with the power of an open OS.  It’s unfortunate that there is no tablet OS build yet, but the handset UI seems like a good fit for small screen tablets. Touch support is built into the OS and the WePad demonstrates that it’s possible to built a good Tablet user interface on top of the netbook version for larger devices. I’m hoping to see more MeeGo tablets soon.