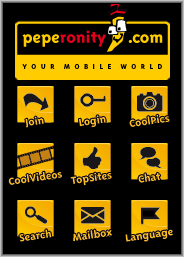 I ran into Peperonity’s Sanda Freilingsdorf at CTIA and quized her on what was new at the site I once naively called “The Biggest Mobile Social Network You Never Heard Of.”

It turns out that there’s a lot that’s new at Peperonity since I last covered them nine months ago. The following are new features I discovered:

Peperonity’s traffic is way up too.  According to Sandra, the site hosts 10 millon pages of user generated mobile content (up from 3.5 million in January) and has one million registered users (was 460 thousand nine months ago). Peperonity is generating 400 million page views per month making it AdMob’s largest publisher.  Top country for traffic is India, followed by Indonesia, Romania, the US and South Africa.
Peperonity also has a business of building white-label mobile social sites for carriers. Current customers include T-Mobile Germany, KPN, TELE2 in Austria  and WIND Greece.
I don’t think I can say that no one has heard of Peperonity anymore.  In fact they claim to be the “Worlds largest mobile social network”  Are they? I don’t know but they are certainly one of the biggest.  If you know of a larger one in terms of mobile page views, pages or number of users let me know.