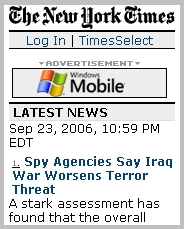 There are so many new mobile sites lately. A year or two ago I’d be lucky if I found a review-worthy new mobile site every month. More mobile sites were shutting down than opening up. That has all changed. I hear of a new site literally every day. I’m hoping to keep up with the flood with more but shorter reviews.

First off, the New York Times. You won’t get much argument, The Times is the US’s best newspaper. I know, newspapers are becoming irrelevant – but The Times is an American institution, an icon. It also has had a harder time adapting to the internet age than most media outlets. Almost alone among web news sites The Times has enforced a subscription model for it’s most valuable resources – it’s archives and some of it’s columnists.  I think that charging for news on the internet where information is free was a mistake that kept the Times from becoming THE web news site. The Times has particularly struggled with the mobile web. There are multiple Times mobile sites, both official and unofficial, all of which seem slightly flawed. Here are the ones I know about

There you have it. Hopefully at least one of these versions of the Times will work on your phone. My recomendation is to try the River if you have a smartphone otherwise start with the new mobile.nytimes site and if that doesn’t work on your phone the Avantgo one should.

One thought on “NY Times”