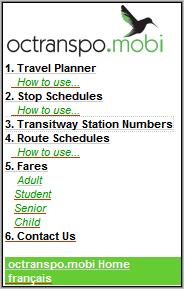 Ottawa’s transit agency, OC Transpo, recently launched a mobile transit site at octranspo.mobi.  The mobile site is being promoted with a prominently placed ad on the agency’s full web site that links to a page with a description of the service and instructions for it’s use. The instructions seem to be targeted at people who have never used the mobile web.  The mobile site itself is intuitive enough that most users should have no trouble using it without having to refer to the instructions.

The site is offered in English and French and has four main functions: 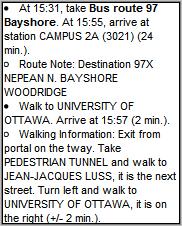 I found octranspo.mobi easy to use on a variety of handsets.  Page sizes are small making the site responsive even on slow networks and low end phones. The route planner’s directions are  very clear and detailed.

There are a few areas where minor changes would make the site’s already very good usability even better.

I don’t know who designed this site, but I’d rate it as one of the better mobile transit sites I’ve seen. The site is responsive, click paths and data entry options are nicely optimized for mobile and the site returns exactly the sort of information a user needs when navigating public transit.   Transit is a natural for mobile, it’s a shame more  public transit sites aren’t as well designed as this one.