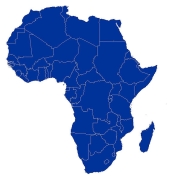 Opera’s latest State Of the Mobile Web Report for the month of September focuses on Africa. It’s an eye opener for anyone with a US or Euro-centric view of Internet use on cell phones.  The report, which tracks the usage of Opera Mini, indicates that traffic from Africa is up 180% since January, 2008. Gains in some African countries are incredibly high.  September over January page views from Egypt increased 2300%, Nigeria 1690%, Libya 8537%, Zambia, 1200%, Swaziland  1700%.  Opera doesn’t give absolute numbers so it’s hard to know whether these percentages translate to a meaningful number of users – except in the case of Egypt which now ranks tenth among all countries in number of Opera Mini users.  South Africa, at sixth the only other African nation in Opera’s top ten, showed an increase of 106%.

These numbers surprised me so I searched for data to compare them with.  I found two sources, AdMob’s latest Mobile Metrics Report (PDF) and AdMob Analytics which I run on the mobile version of this site.

Admob’s metrics report lists the number of ad impressions, which correspond roughly to page views, for the top 20 countries world wide. AdMob’s top twenty includes three African nations; South Africa where impressions were down 7% over a year ago, Nigeria which was up 2900%, and Kenya up 210%.

WapReview.mobi’s statistics only go back to July and, while not as dramatic, show solid gains.  Traffic from the entire African continent was up 88%  for Octiber compared with July.  The  top African countries in terms of overall traffic on wapreview .mobi were all up too; South Africa by 45%,  Nigeria up 91%, Egypt up 178% and Kenya up 53%. Overall, wapreview.mobi traffic was down 1.65% between the two periods so Africa is bucking the trend.

Although the results are mixed, inconsistent and cover different periods I think it’s clear that there is real growth in mobile browsing occurring in Africa.  The increases reported by Opera and Admob’s Nigeria numbers are so large that they are hard to believe.  I have to think that there were other factors at work to skew the numbers.  In the case of Opera Mini, perhaps an African provider started bundling Opera Mini with handsets.  Maybe a major Nigerian mobile web destination signed on as an AdMob publisher. My own WapReview analytics results are harder for me to discount.  Admittedly, the sample size is small.  WapReview.mobi recorded 261,547 page views in the last 30 days, of which 8,799 came from Africa.  But an 88% percent increase in African traffic in three months certainly seems significant.

The International Monetary Fund publishes a  document that groups all the nations of the world into two categories; “Advanced Economies” and “Emerging and Developing Economies“, based on a number of economic factors. The top ten countries on both the AdMob and Opera reports include seven from the IMF’s list of Emerging and Developing Economies.  AdMob’s are Indonesia, India, South Africa, Philippines, Romania, Nigeria and Malaysia. Opera’s list includes Russia, Indonesia, India, Ukraine. South Africa, Poland and Egypt.  Developing countries in Asia and Eastern Europe have been generating significant mobile web traffic for several years but the heavy traffic from Africa is a new phenomenon. Africa has less wealth and has taken longer to get to that point of significant mobile web use but it’s happening now. Not only are developing nations among the top countries in use of the web on mobiles, they are also the nations with the highest growth rates in its use and this seems especially true of Africa.

The usual explanation for the relatively high mobile use in developing countries is that connected PCs are scare in these countries. Mobile phones are relatively common and have thus become the chief means of accessing the web.

The Opera report lists the top ten sites visited by users in ten African countries. They turn out to be pretty much the same sites that are popular in the US and Europe; Google, Yahoo, Wikipedia, MySpace, BBC, etc.  I think this is a temporary phenomenon, the next step will be the growth of uniquely African mobile web destinations and services particularly for news, sports, banking, business and shopping.  Most of this development will be home grown, the barriers to entry for the mobile web are low, it’s not cost effective for businesses in Nigeria to hire UK or US mobile web designers when there is local talent available. However the mobile boom in the developing world, assuming it can be sustained through the current global ecconomic downturn, will drive demand for commodity resources like hardware, hosting, content and ad delivery networks – which can be served from anywhere in the world.