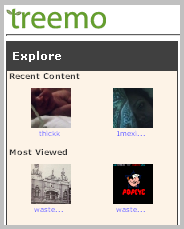 Treemo is a new social content sharing site which combines most of the features of YouTube and Flickr with a strong mobile web presence. Treemo allows users to upload and share video, audio, text and images. The site’s free account has much more generous upload and storage limits than Flickr’s. Treemo allows uploading 200 MB per month, ten times as much as Flickr. In addition Flickr limits free accounts to displaying only the 200 most recent images. Treemo doesn’t limit the number of images but does cap total storage at 1 GB which is enough for at least 400 large, high quality images or a couple thousand of typical web quality.

For video on the other hand, Treemo’s limits are lower than YouTube which accepts videos up to 100MB each with no limits on total uploads per month or total storage size. Treemo’s limit is 20MB per video and there are also the 200MB/month upload and 1GB total storage caps. Treemo has announced a $3/month premium account with unlimited storage but it’s not available yet.

But Treemo has something that YouTube doesn’t. Every video on Treemo is available in mobile friendly .3gp format from Treemo’s mobile site. I uploaded a 400x300px, 17 MB .wmv file which Treemo converted to a 180×150 px, 3 MB mobile video. The mobile videos don’t stream though, you have to download the whole file before it starts playing.

Treemo’s PC web site is very slick, using drag and drop for reordering content and moving media between one set (think Flickr album) and another. Content can also be tagged and the location where the shot or video was made can be specified. Like YouTube and Flickr, Treemo makes it easy to embed content in other sites like MySpace with cut and paste links. The social features of Treemo include comments, messaging and the ability to pick your favorites from other user’s content. The “Most Favorited” content is highlighted on Treemo’s front page. Currently Treemo is ad-free but has plans for advertising – but users get to choose if they want to have ads displayed alongside their content. For those who allow ads, Treemo will split the revenue with the user.

I was really impressed with how polished and professional the PC site was especially so soon after it’s September launch. Unlike many of the new Web 2.0 Ajax based sites, Treemo’s PC site is fast and stable. Even on a slow machine, dragging and dropping is smooth, fast and error free. 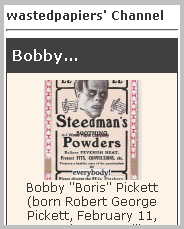 a profit taker. They collect donations of digital cameras and give them to several Seattle-area non-profits that offer photography classes to disadvantaged youth. The donor gets 3 months free premium service and a tax deduction. The site also encourages Cell Phone donations via links to another charitable group.

The mobile part of Treemo is very full featured, giving access to all of the content, searchable by user, tag or location. Mobile users can comment, message and “favorite” too. Mobile uploads are by email and MMS. It would be nice if the site also supported direct browser uploads like Flickr mobile does. While not all phones do browser uploads, they are a money saver for users on unlimited data plans.

The mobile site’s usability is reasonably good but not perfect. I’d like to see better use of access keys which only a few pages have. Also, some of the index pages have as many as 20 images on them which is more than most mainstream phones can handle.

Normally I use Opera Mini for graphics heavy mobile sites like this one but Treemo doesn’t recognize Mini as a mobile browser and serves it the full PC site – which is almost unusable in Mini. I haven’t been able to find a URL that goes directly to the mobile edition. I think it’s great when sites deliver mobile content from their main URL when a mobile browser is recognized like Treemo does. But browser detection is never perfect – an alternative URL that’s guaranteed to deliver mobile content is needed too.

Overall, I’m quite happy with Treemo’s generous storage and upload limits and very full featured mobile version. The on-the-fly down-conversion to .3gp mobile content is a great feature for anyone with a video capable 3G phone and suitable (unlimited) data plan. For the rest of us this is the better mobile Flickr. Flickr does have it’s own mobile site (review) but it’s much more limited than Treemo’s – no commenting or messaging and searching is only by user.

The field of social media sharing is crowded and Treemo is a late entrant but I think they have a chance of success because of the combination of generous storage limits, great site design and usability and a very promising mobile presence.