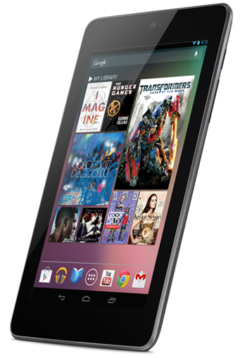 Google I/O was last week. While I didn’t attend, I did follow it closely at a Google I/0 Extended event at Google’s San Francisco offices where I watched both keynotes and a number of the tech sessions on the big screen.

The most signifigant announcement of I/0 was the $199.99 (for the 8GB version) Nexus 7 tablet. It out-specs all the other 7 inch tablets in the market by a significant margin. I expect the Nexus 7 will quickly become the best selling Android tablet and possibly the best selling tablet overall. I believe that Google has three main goals for the  Nexus 7:

To help Android top Apple’s tablet market share and become the dominant computing platform in the world. The iPad currently owns 60% of the tablet market, in spite of being a premium priced product. Market share leadership is a meaningless symbolic victory, but given Apple’s all out legal war against Android, I think Google would like to be able to claim that Android is the popular favorite. Plus big sales mean lots more traffic and targeting data for Google’s cash cow, search advertising.

The Nexus 7 also targets Microsoft desktop dominance. Personal computing is moving from PCs to the post-PC world of tablets and smartphones.  The fastest growing market for smart devices is the developing world, where bang for the buck is the driving factor and where free and open Android has a huge cost advantage over anything from Microsoft or Apple.

To gain control of the Android tablet mass market.  The Kindle Fire, Nook Tablet and Nook Color, the least expensive quality tablets.  account for nearly half of all Android tablet sales. They run modified versions of Android designed to direct users toward paid content from Amazon or Barnes and Noble. This means less revenue and a loss of brand recognition for Google. The Nexus 7 gives users superior hardware and performance plus more choice and flexibility at the same price point. At the same time it promotes Google’s vision of an a relatively open computing platform that serves users, society and innovation while giving Google the data it needs to deliver more targeted, and thus more effective and profitable advertising.

Provide a consistent, high volume pure Google Android experience.  Mobile operators and device manufactures hamstring Android by blocking upgrades, adding bloatware and diluting  the user experience with custom skins. It’s significant that the Nexus 7 is a Wi-Fi only device sold direct to consumers by Google.  Google is in complete control of the hardware and software, including updates. The Nexus 7 and it successors  gives Google a showcase for Android and all Google services, present and future.

To summarize, the Nexus 7’s delivers a near state of the art post-PC computing platform  at very a low price point. It and its inevitable successors are intended to sell in huge volumes globally and make Android the dominant personal computing platform.

2 thoughts on “With the Nexus 7, Google Aims to Dominate Post-PC Personal Computing”